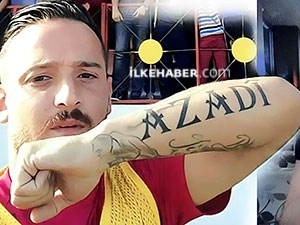 This is the heartwarming story of how some football players classily poked their fingers into the eye of Turkish authoritarianism.

Their daring act of solidarity—worthy of the political pages of our daily newspapers—took place in a football stadium in Hamburg, Germany on October 16, 2016.

Members of a local team, St. Pauli, donned their brown jerseys emblazoned with this inspiring message:

Those uplifting words adorned the front of their uniforms. On the back, every player sported the number 23 and the name “NAKI” next to their own first names.

Fearless fans brandished equal boldness. They paraded a large banner from the bleachers: “DENIZ NAKI… ONE OF US!” They hoisted signs proclaiming: “NAKI!”

It looked like the large stadium was ablaze with Naki fans—while enthusiastic players applauded Deniz!

What did it all mean?

Fans and players alike were fervently supporting Deniz Naki, a well-liked midfielder who used to play for St. Pauli, booting many memorable goals while wearing his number 23 jersey

But off the field, he had violated freedom-strangling political correctness. He had made the mistake of standing up for freedom!

He was accused of tweeting for the “wrong” side in Recep Erdogan’s authoritarian Turkey and faced the horrifying prospect of languishing in a Turkish prison for up to five years.

His indignant teammates and their passionate fans wouldn’t hear of it. They were out in full force and they were determined to win for Deniz and freedom against Erdogan and totalitarianism.

Sadly, there were some AWOLs. Two players (Cenk and Ersin) refused to wear the NAKI jerseys, and wouldn’t pose for the group photo commemorating the event.

Were they possibly Turks? If so, what did St. Pauli make of their indifference toward their beloved Naki?

The team’s tweet put the questions to rest: “Due to the political situation in Turkey, we do not want to cause any trouble for Cenk and Ersin.”

Cenk and Ersin were probably afraid of being branded guilty by association, or didn’t care for Deniz Naki and his postings on social media, which landed him in hot water.

Either way, I was disturbed by their behavior on the green field, murmuring: Turks and Kurds can’t do it alone…they need help, outside intervention, to taste the fruits of peace.

Deniz Naki’s story is instructive and worthy of our reflection—especially if it nudges us toward reconciling these two warring peoples.

He was born to Kurdish parents in Duren, Germany. An okay student at school, he excelled on soccer fields and wore the German national jersey for young players three seasons.

As an adult, he played for various German Bundesliga teams, including St. Pauli. In 2013, the Turkish team Genclerbirligi spotted him and signed him to a contract to play in Turkey.

Deniz knew that Turkey is not a Kurdish-friendly country. His father hailed from Dersim, site of an atrocious massacre by Ataturk in the 1930s. His old man had abandoned Turkish-Kurdistan and sought asylum in Germany.

But Deniz, though Kurdish by blood, was German socially. His Kurdish and Turkish are better now, but he initially sounded like a Hans. Besides, he surmised, he was going to kick ball, not run for public office.

“Events are stronger than plans,” noted the first chancellor of Germany, Otto von Bismarck, and a year into Deniz Naki’s contract with the Turkish team, a monstrosity called the Islamic State reared its hideous head in Syria and Iraq.

Its depraved and wicked cutthroats attacked Kurds in Shengal and Kobane and declared Kurdish women “halal” as a distinguishing feature of their “unique” brand.

Though a political neophyte, Deniz took to his social media platforms to denounce the heinous deed and urged the powers that be: “#Save Our Girls from ISIS!!!”

Kurds, naturally, liked what he was doing for them, but others were alarmed by his activism. Three of them cornered him on a quiet street in Ankara and brutally blackened his right eye. They threatened him with worse violence if he didn’t cease his “silly advocacy.”

Now Deniz Naki is not exactly a pushover. He resisted his parents’ plea to come back to Germany. But what made playing in the Turkish capital impossible was his team’s indifference towards his attackers: he was hired to use his legs—not his fingers.

He parted company with Genclerbirligi and after a hiatus of nine months signed up with Amedspor, the most popular Kurdish team in all Kurdistan.

His deadly right kicks have delighted his Kurdish fans, earning Amedspor the right to compete with Turkish powerhouses such as Bursaspor and Fenerbahce.

But his postings have infuriated Turkish authorities, burdening his team with exorbitant monetary fines and banning him from playing in as many as twelve consecutive games.

If anything, these punitive steps have only increased his appeal. “Crowds surround me for selfies anytime I visit the city,” he told a reporter last year.

With Deniz, there is an added bonus: His right forearm is tattooed with the word, “AZADI,” which means freedom in English. “It is part of my photo experience with my fans,” he added.

In Amed, two months after the Hamburg game that ended in a tie for St. Pauli, the Court initially found Deniz Naki not guilty, but recanted last month after the Appeals Court sent the case back to it, which then gave him a suspended sentence of one year, six months and 22 days in jail.

He was also ordered to mind his words for five years.

“We are going to appeal the verdict,” said his lawyer, Soran Haldi Mizrak. “Deniz Naki has never advocated violence nor has he engaged in hate speech.”

Given the alarming levels of violence and intolerance in Turkey, one is left wondering if it will ever dawn on Turkish ruling circles that freedom is inversely related to both.

The original of this oped first appeared on rudaw.net, a Kurdish daily.