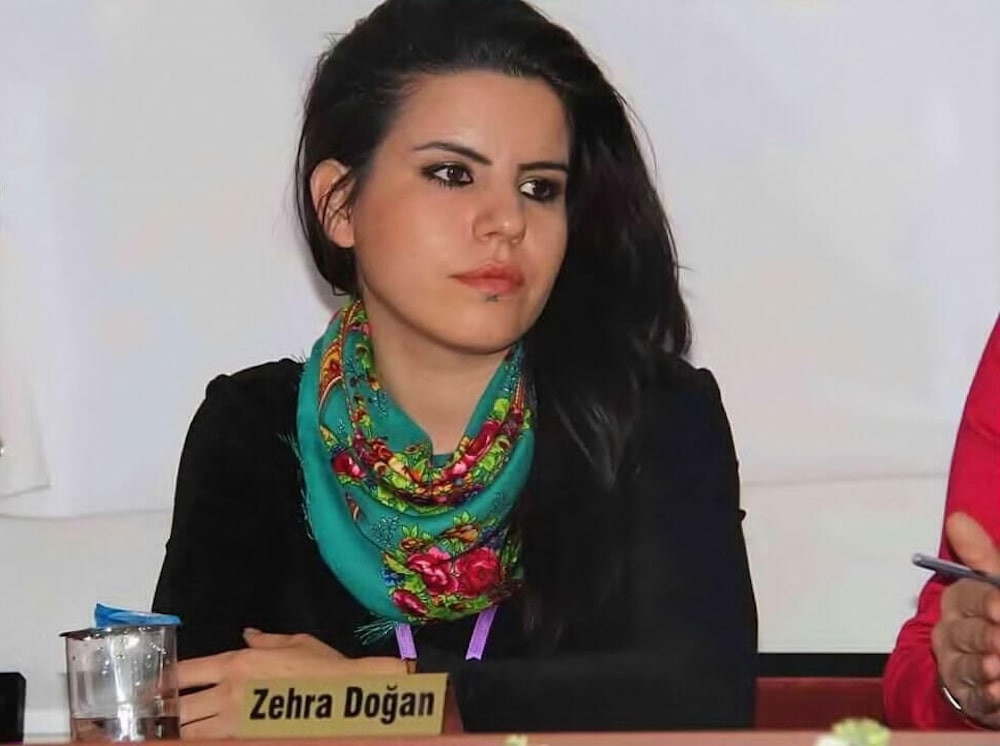 He was already world-famous living in Paris, France.

She was hardly known outside the circle of her friends living in Mardin, Turkey.

He was not in Guernica, Spain when Nazis and fascists bombed it from the air and turned it into a ghost town.

She was inside Nusaybin, a Kurdish town in Turkish Kurdistan, when Erdogan’s army bombed it and turned it into a moonscape.

Pablo Picasso, a Spaniard in exile, felt compelled to color the devastation of his native Spain.

Zehra Dogan, an internally displaced Kurd, did the same for her native Kurdistan.

George Steer, a reporter for The Times of London, was the first to photograph desolated Guernica inspiring Picasso to undertake his painting.

An aerial photo of destroyed Nusaybin on a twitter feed of Turkish Special Forces inspired Zehra to undertake hers. Picasso spent five weeks turning the malice of German and Italian war criminals into his masterpiece, a condemnation of war for all times.

I don’t know how long it took Zehra to finish her painting, but Turkish authorities claimed she first broadcast it on December 21, 2016.

The Nazis didn’t think much of Picasso, belittling his Guernica painting as “a hodgepodge of body parts that any four-year-old could have painted.”

The lackeys of Erdogan gave Zehra’s Nusaybin painting a silent treatment—till the lovers of art began flashing it around the world.

Picasso replied, “No, you did.”

Unlike Germans who left Picasso alone, Turkish police arrested Zehra in a Mardin café on July 21, 2016.

Two charges were leveled against her: one, she was a “terrorist”; two, she was a “contributor” to its propaganda.

Zehra rejected both charges, noting that she was a professional reporter and accredited with the Society of Turkish Journalists.

She was released on condition that she would not travel abroad and would report back to the same Court on March 2, 2017.

While she was adjusting to her new role as a “defendant,” Erdogan suspended the constitution and ran the country as an absolute ruler.

He shut down 178 News organizations and arrested 162 journalists.

JINHA, where Zehra had eked out a living, the first news organization in Turkey entirely staffed by women, was closed on October 30, 2016.

She learned this while she was in custody and recruited her fellow inmates to publish a handwritten newspaper, Free Agenda, Prison Issue.

Her headline read, “If You are From Nusaybin, You are a Traitor, Says the State!”

That was a reference to her war days in Nusaybin where she had seen atrocities that had numbed her for life:

A Turkish soldier, shielded by his armored vehicle, had cowardly shot a 12 year-old Kurdish boy while playing marbles in the street.

When his parents picked up his lifeless body, they had difficulty extracting the marbles from his death-clenched fists.

In nearby Cizre, a Turkish sharpshooter gunned down Tahir Yaranmis, a 35 day-old baby, in front of his mother.

A brutal lockdown prevented the family from burying the child.

“He began to rot and an awful smell took over the neighborhood,” Zehra confided to a reporter afterwards. “I can never get that smell out of my mind.”

When words, her stock in trade, didn’t seem to make a difference in the lives of Kurdish babies like Tahir, she painted more often, never thinking that her brush might one day land her in jail.

It did when she reported back to the Court on March 2, last month.

The Court found her not guilty for membership in a terrorist organization, but sentenced her to two years, ten months and 22 days for promulgating its work.

The cited “work” was her painting of what Turkish Special Forces had done in Nusaybin! Last February, the United Nations issued a report turning the “work” into plural and noted that 29 additional Kurdish town and city centers had been turned into “moonscapes and vast parking lots.”

Zehra, after her sentence, tweeted from the Courtroom:

“I was given [a prison sentence of] two years and 10 months only because I painted Turkish flags on destroyed buildings. However, [the Turkish government] caused this. I only painted it.”

That government, run by a war criminal, loves oppressing Kurds and murdering their children.

Franco, the mastermind of Guernica, due to his anti-communist credentials, never faced censure and died in his bed, peacefully.

Erdogan, the mastermind of Nusaybin and more, because of his support for Al Qaeda type organizations in Syria, will, I am afraid, join his Spanish soul mate sooner than he thinks.