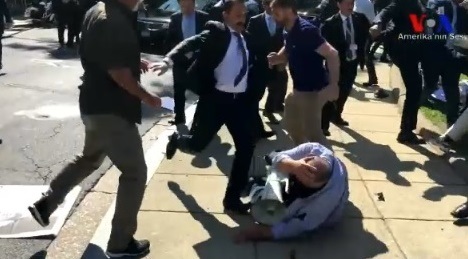 Turkish Embassy statement regarding Sheridan Circle attacks on May 16, 2017 and a Kurdish Response

Turkish Claim: Groups affiliated with the PKK, which the U.S. and Turkey have designated as a terrorist organization, gathered yesterday without permit in Sheridan Circle in the immediate vicinity of the Ambassador’s Residence, while the President of Turkey was visiting the Residence.

Kurdish Response: This is a baseless charge, a shameless fig leaf seeking to absolve the Turkish thugs who brutally and gratuitously attacked a group of peaceful protesters in front of dozens of Metropolitan Police officers.

Some Kurds may have sympathies for the armed Kurdish struggle in the mountains of Kurdistan, but the ones assembled near Sheridan Circle were merely waving signs urging freedom for imprisoned Kurdish parliamentarians.

There were also some pennants of the YPG, a Kurdish group, which is actively working with the Pentagon to defeat ISIS inside Syria.

As to the permit, one doesn’t need one to protest on a Washington sidewalk, if your group is less than 25 people. These Kurds and their friends were definitely less than 25, as the video footage clearly shows.

Kurdish Response: The demonstrators had a different mission: to expose the Turkish president as a war criminal. Not used to being challenged, new video shows him watching his “bodyguards” attack the protestors as if he were watching a show. Not just Kurdish heads were cracked, but the very constitution of the United States was soiled. If he thought he was teaching us a lesson in subservience, the opposite has happened: an outraged public has joined the Kurds to condemn the brutality of the Turkish thugs.

Besides, if speaking up for human rights “provokes” the Turkish president and his ambassador, we are happy to assume the title of provocateurs. It will be our honor to make the world uncomfortable for brutes and bullies.

The Kurdish signs said it all: “Free Selahattin Demirtas” and “Free Figen Yuksekdag,” co-chairs of the third largest political party in Turkey, the HDP.

Turkish Claim: The Turkish-Americans responded in self-defense and one of them was seriously injured.

Kurdish Response: This is like saying a man bit the dog. It is utterly lacking in evidence, and deceivingly seeks to twirl fiction into fact.

Turkish Claim: The violence and injuries were the result of this unpermitted, provocative demonstration. We hope that, in the future, appropriate measures will be taken to ensure that similar provocative actions causing harm and violence do not occur.

Kurdish Response: Kurds and their friends certainly hope that “appropriate measures” will be taken in the future to ensure that “provocative actions causing harm and violence” are not wantonly and viciously committed by Turkish hooligans against peacefully assembled protesters.