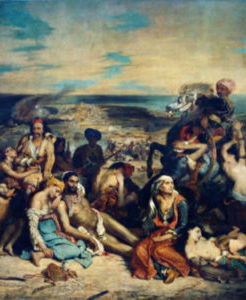 Many Kurds may not know who Lord Byron is.

Those who do are richer for it; those who don’t, poorer.

George Gordon Byron (1788-1824), the great English poet, was born with a clubfoot but towered tall in his valiant defense of freedom.

Indeed, the 6th Baron Byron died while supporting a brigade of Greek freedom fighters against the Turks in Missolonghi, Greece.

Like the educated Europeans of his day, he was well versed in Ancient Greek and eagerly visited its glorious homeland barely out of his teens.

The cheeky English bard felt at home in Athens, even fell in love with one of its maidens, Theresa Makri:

“Maid of Athens, ere we part, Give, oh give me back my heart,” he wrote of her in his poem, “Parting and Absence”.

Less frivolously, he gave his heart to Greek lovers of freedom in their hour of great need, declaring:

“I have come here to assist in the regeneration of a nation.”

The old Greece had been the magnificent rising sun of Western Civilization, ornamenting it with its brightest lights: Socrates, Pericles, Thucydides, Aristophanes, and Aristotle.

But when Lord Byron visited in 1809, it had been defaced by centuries of endless conquests.

Europeans, such as Voltaire, who attributed their greatness to the surviving texts of Ancient Greeks, urged Catherine the Great of Russia to liberate Greece.

As if heralding some of today’s politicians, he felt Turks were unfit to be in Europe, due to their brutally enforced superiority complex.

Kurdish readers will vividly recall how Saddam Hussein’s henchmen nauseatingly ridiculed us, in Arabic, as “goats.”

Both beasts were expendable and both were expended generously, often on a whim, sometimes as a “lesson.”

But just as the Greeks survived their tormentors, we Kurds have outlasted Saddam Hussein and his cronies.

In the Greek-speaking world, the Greek Church acted as a depository of things Greek while praying for dispersal of dark clouds shrouding its flock.

Abroad, the diaspora Greeks such as Rigas Feraios and Adamántios Koraïs kept the fire of liberty alive for the second rising of Greeks in Greece proper.

To Feraios belongs the famous oath of liberty:

O Lord of all creation, I solemnly swear to Thee
Never to act as tyrants do and never be slave to them

To Koraïs, a friend of Thomas Jefferson, belongs a more cautionary observation, “education,” as an elevator of freedom:

“I have learned that the increase and spread of education in the French nation gave birth to the love of liberty.”

But the Greeks were not free to invest in their education and ached for immediate liberty, as we do today.

In March of 1821, the gods must have decided to help them a tad, when Ali Pasha of Ionia rebelled against Sultan Mahmud II.

The Turkish army of Peloponnesus was ordered to head north and bring Ali Pasha to his knees.

Considering the absence of the main Turkish army in Greece as a good omen, the Greeks rebelled and took control of their peninsula, initially, south of Corinth.

In the ensuing years, unfortunately, both sides committed war crimes.

In the city of Tripolis, by common agreement, 2,000 Turks had surrendered to the Greeks to leave for home. They never did.

In the Island of Chios, the Turks got more than even by enslaving 45,000 Greeks and murdering 25,000 of them by way of retribution.

The Greek losses were mounting and staggering. The plight of vanquished islanders compelled Delacroix to paint Chios, which incensed the chattering classes in Europe and Americas.

Nearly 360 Europeans flocked to fight for Greece, including one Spanish woman dressed as a man. Some 274 of them died there.

President Monroe of America was sympathetic, but his isolationist Secretary of State John Quincy Adams thwarted his goodwill.

That didn’t stop one Kentucky barber from proudly donating all his hair-cutting receipts for one week to promote Greek freedom.

When Sultan Mahmud II feared the loss of Greece, he promised it to Mohammed Ali of Egypt if he could restore it to the “blessed” realm.

Mohammed Ali’s son, Ibrahim Pasha, was tasked with the job of exiling its native population to Egypt and repopulating the country with Muslims.

Great Britain, France and Russia joined forces to defeat Turkey, Egypt, Libya, Tunis and Algeria at the Battle of Navarino that sent the surviving Turks back to Constantinople and Ali Pasha and his North African allies to Egypt.

Byron was dead. Greece was free. Ottomans had been thought a salutary lesson in humility.

Today, 190 years later, can we duplicate the same daring act of Greeks, on our own, minus the war crimes and outside help?

If not, can we count on the support of at least one principal power?

The original of this op-ed first appeared on Rudaw.net