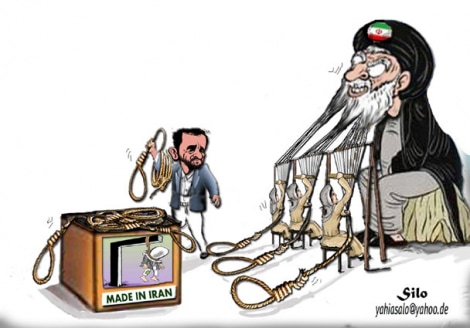 (Or an Open Letter to Mahmoud Ahmadinejad)

You recently made news in America with your open letter to President Trump, renewing your habit of venting your pent-up frustrations by writing to American presidents.

President Trump, despite his news-junkie bents, has so far kept quiet.

Let’s hope he keeps giving you the silent treatment.

Your letters reflect badly on you, and embarrass those of us who hail from the Middle East.

As a native of Kurdistan, I hate seeing you provide grist for late-night comedians to demean our image!

You should be as sick and tired as I am of being a humiliating punch line for the English-speaking world.

Why not let them laugh at Europeans, Latin Americans, Africans, and Asians for a change?

But your letters clearly show that you want to keep lumping us all together as happy-go-lucky zombies of this world.

My appeal is a desperate attempt to stop you, hopeless as it may be, from bloviating for the sake of satirical equality.

To begin with, you say Persians have “presented thousands of scientists and artists” with “innumerous” achievements to the world.

One of them, Anousheh Ansari, was in the news the evening of the day that your letter went public.

She was addressing millions of Americans on behalf of Ashgar Farhadi, a compatriot of yours, who won Hollywood’s highest award, an Oscar, for best foreign film.

The Internet dubbed her an “astronaut” and said this conqueror of the stars had rained wisdom on Americans when she quoted the filmmaker:

“Dividing the world into the ‘us’ and ‘our enemies,’” is futile and it is bound to increase the level of the “fear” in the world.

As a politician, you were more direct: “The contemporary US belongs to all nations, including the natives of the land. No one may consider themselves the owner, and view others as guests or immigrants.”

That’s a good thought, in theory.

But in reality, such sanctimonious lecturing—by the artist, the “astronaut” and you, the politician, alike—amounts to the proverbial kettle calling the pot black!

But in reality, Persian-speaking Shiites run the show.

Isn’t that a clear case of “us—good Persians” versus “our enemies—bad Kurds, bad Azeris, bad Arabs and bad Balochis” who are forced to submit to the dictates of Ayatollahs in Tehran?

Don’t you think this state of affairs guarantees perpetual enmity and yes, “fear,” between the dominant race and its subjects?

Lest you forget, these same “good” Persians banned the language of the Kurds in 1935 and joined their neighbors in 1937 to deny Kurdish speakers freedom across stateliness by signing the Saadabad Pack!

If America belongs to everyone, shouldn’t your country also belong to the disenfranchised peoples who make up the majority of Iran?

Maybe you could discuss that in your next letter?

One other thing about the Oscars night: it turns out you and Mrs. Ansari are cut from the same cloth.

She goes on a self-funded trip into space as a tourist and comes back telling a gullible world she is a cosmonaut!

Henry Kissinger followed Christopher Columbus to America—but did that make him an explorer as well?

You became president of Iran (2005-13) and now are claiming to be a neighbor of God!

You wax hotter when you hail the late Imam Khomeini as “the flag bearer of freedom, justice and brotherhood” for the entire world.

This may shock you, but no one except Shiites consider Mr. Khomeini “the flag bearer of freedom!”

And your claim to be a partner of God is equally bogus.

That title belongs to true lovers of humanity, such as Mahatma Gandhi, Leo Tolstoy (towards the end of his life), Dr. Martin Luther King Jr. and Caesar Chavez.

They cherished life unselfishly, and fearlessly fought for their ideals for the benefit of all of us—not just a privileged few.

The world better remembers Imam Khomeini as the author of fatwas that rained death and destruction on innocent writers and translators.

For we Kurds, his name will forever be branded with infamy for machine gunning Kurdish patriots and then charging their parents for the cost of the bullets if they wanted to bury their children.

And you and his successors have only added a new twist to this farce: cruelly hanging Kurdish activists from cranes as spectacles for the merriment of your children.

If you really want to do some good, humbly get down on your knees and ask Kurdish mothers for forgiveness for terrorizing their twilight years.

If you did that noble thing, you might be taken seriously and an American president might just respond to one of your letters.