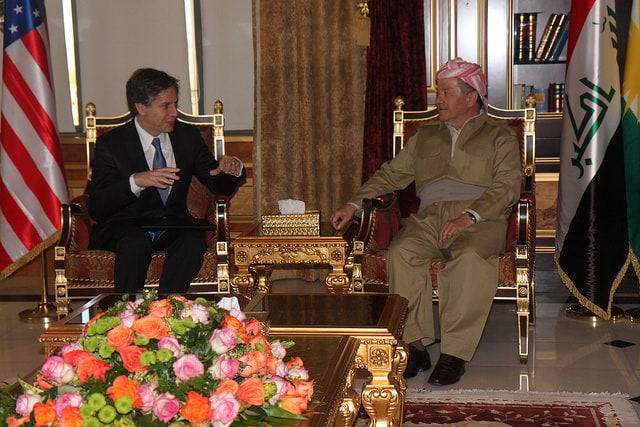 American judges are under a glaring spotlight.

I can’t speak for 3.3 million Muslim-Americans, but 50,000 American Kurds had one common sentiment: black robes rock!

I thought that too—until I read the decision of a Virginia judge who ordered five teenagers to visit the U.S. Holocaust Memorial Museum in Washington, DC!

What kind of crime “earns” one an admission ticket to a favorite museum of mine?

The teens had defaced a historic black schoolhouse in Thomas Jefferson’s home state with graffiti glorifying the supremacy of one race over another!

I grew up in Turkish Kurdistan—where Turkish supremacy over Kurds isn’t a crime.

It’s the law of the land!

As a boy, my young lips were forced to recite, “Atam sen kalk ben yatam,” meaning: “Ataturk, wake up from your sleep, let me die in your place!”

His face still adorns the money that my mom uses to buy her painkillers, and her grandchildren attend schools that are named after him.

If American judges were administering justice in Turkey, what would they say or do about the virulently racist Turkish laws?

The five teens were also ordered to read twelve books, one per month, from a list of 25 authors primarily black and Jewish ones.

I am a big believer of transformative power of reading.

But then I read an op-ed, “To Defeat ISIS, Arm the Syrian Kurds,” by Antony J. Blinken.

I began to doubt the healing power of the written word or subjecting misguided teens to the horrors of a Nazi occupied Europe.

If that remedy had worked, Mr. Blinken would never have penned his op-ed for the New York Times.

In it, the one-time number-two man at the State Department urges President Trump to use the Kurds in Syria to destroy ISIS and then arm the Turks to destroy them, I guess, as a reward for their troubles.

This kind of “counsel” used to be stamped “Top Secret,” and students of history had to wait 25 to 50 years to access it in dusty archives.

That rule doesn’t apply, if the subject is Kurds.

Who is Mr. Blinken and what is his gripe with the Kurds?

He was born into wealth—his father a banker and his mother a patron of the arts.

He attended schools like Dalton and Harvard and spent some of his summers as a counselor for underprivileged kids on Long Island.

But his mentor in his formative years was his stepdad, Samuel Pisar, a Holocaust survivor.

He wrote a blood curdling account of his ordeals, Of Blood and Hope, and apparently cheated the angel of death, not once, but three times.

With the trio as parents, young Blinken lived in Paris and New York and befriended the cream of their high societies.

John Lennon shared his autograph. Ex-French President Valéry Giscard d’Estaing was an intimate of his stepdad. Leonard Bernstein, Mark Rothko, Abel Ferrara and Christo were frequent guests at the homes of his parents.

To that illustrious list, he has now added a few Kurds as well: Jalal Talabani, Masoud Barzani and Selahattin Demirtas, the patriots of Kurdistan.

Yet, this child of privilege—a servant of the poor taught at the knee by a graduate of Auschwitz and Dachau concentration camps—urges his president to deliberately harm the Kurds!

Admittedly, the Kurds he dislikes aren’t exactly angels; they believe nothing wrong can come out of the mouth of their leader, Abdullah Ocalan, and are marching towards a one-party dictatorship in the areas that come under their control.

Still: to recommend their use and homicide for the sake of the Turks?

Why not engage them on a condition that American largesse will only come when freedom of speech and assembly will be guaranteed to all residents that live in their areas?

If Americans are so allergic to one party rule, they could also nudge Kuwait, Bahrain, Saudi Arabia and Qatar, the allies of the United States, to be more inclusive!

As to the relevance of Holocaust for our children, no one who is associated with one of its survivors should ever urge America to join Turks in callously spilling Kurdish blood like water.

Towards the end of his life, Mr. Blinken’s stepdad, Mr. Pisar, wrote the words for Leonard Bernstein’s “Kaddish” Symphony No. 3.

Titling his contribution, A Dialog with God, he appeals to the Almighty from the brink of a gas chamber with these haunting words:

“Why do You abandon us? How can You allow such carnage? Do You even care?”

Kurdish mothers would like to ask the same questions to Mr. Blinken.

The original of this op-ed first appeared in Rudaw daily on February 20, 2017