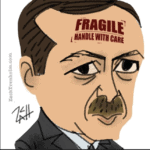 A coup may erupt in Turkey, where half of Middle Eastern Kurds live. At least that’s the prediction of the RAND Corporation, an American think tank. That should alarm those who believe, as I do, that the worst of civilian governments are better than the best of military dictatorships. Although Turkey has a civilian government… Continue reading →

Jan 15, 2016 Why is President Obama silent over brazen human rights violations in Turkey? Will America turn a blind eye to the shelling of Kurdish civilians by Ankara? America supplies the Turkish state with weapons to murder Kurds, the only group that has bravely fought and defeated the West-hating Islamic State cutthroats. This American… Continue reading →

March 17, 2013 “We are the ones we have been waiting for.” Barack Hussein Obama Dear President Obama, Like the sudden fall of Berlin Wall you showed up unannounced in my life. Like most Americans, I was not prepared for your spectacular entrance— exploding upon the national scene as the star-studded keynote speaker at the… Continue reading →