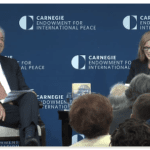 In August 1914, the Ottoman Empire joined the Central Powers of Germany and Austria-Hungary in a war against the Allied Powers of Great Britain, France and Russia. Nine months later, its pasha leaders, Enver, Talaat and Djemal, fearing the revolt of Armenians under their jurisdiction, branded them as traitors and declared open season on murder.… Continue reading →

In front of the Cell of Atonement at Sheridan Circle Washington, DC March 7, 2001 Seven years and two days ago, Leyla Zana was arrested at the door of the Turkish parliament building in Ankara, Turkey. Nine months and three days later, she was sentenced to fifteen years in prison. A duly and popularly elected… Continue reading →

HONORABLE BOB FILNER OF CALIFORNIA IN THE HOUSE OF REPRESENTATIVES WEDNESDAY, MARCH 29, 2000 Mr. Speaker, I rise today to introduce a resolution to ask for the freedom of Leyla Zana, Hatip Dicle, Orhan Dogan and Selim Sadak as well as the lifting of the ban on the Kurdish language and culture in Turkey. The… Continue reading →

By Kani Xulam March 31, 1998 [The International Peace and Conflict Resolution Program at American University gave its annual Capital Area Peacemakers Awards on March 31, 1998. Kani Xulam was among those who were honored.] I want to thank the members of the Community Action and Social Justice group for thinking of me as worthy… Continue reading →

Investing in Peace Through Hunger and Cold By Kani Xulam Friday, November 28, 1997 Dear Friends and fellow Kurds, Forty days ago today, six of us undertook a fast here in Washington to free a Kurdish woman, Leyla Zana, and to spark a discussion on the plight of the Kurds.  We had prepared ourselves for… Continue reading →

Saturday, October 25, 1997 Page A18 The Washington Post EFFORTS TO TAKE political advantage of political prisoners are an old  story. The current case in Washington involves Leyla Zana, an  internationally known advocate of self-determination, or statehood, for  Kurds in Turkey. Elected to the Turkish parliament in 1991, she was  sentenced three years later to… Continue reading →

Wednesday, May 28, 1997 Washington, DC Jose Ramos Horta 1996 Nobel Peace Prize Co-Laureate Free Leyla Zana Reception The honor is mine to be here, to try to lend my humble and faint voice to a cause, a people , the Kurdish people, in one of the most critical strategic regions of the world, a… Continue reading →

By Kani Xulam December 5, 1996 December 8, 1996 will mark the second anniversary of Leyla Zana’s formal imprisonment in Turkey’s Ankara Closed Prison. She was arrested by police in the Turkish parliament on March 5, 1994, after her mostly Turkish colleagues voted to lift her parliamentary immunity and that of several other Kurdish deputies. Leyla… Continue reading →

By Kani Xulam March 26, 1996 Hillary Rodham Clinton is on a tour of five countries for ten days. Among the places she is scheduled to visit is Turkey. While in that country, she is going to give a speech on the coexistence of secular governments and religious societies. A better topic for a speech… Continue reading →