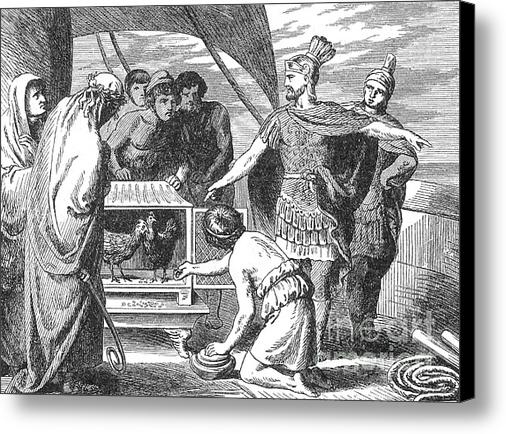 Rome was snarled in its First Punic War against mighty Carthage.

One of the two Roman consuls for the year, Publius Claudius Pulcher, thirsted for “glory” and wanted to humiliate the great Carthaginian naval power.

The fact that Romans were new to seafaring and their foes were masters at sea did not daunt him.

At the coastal town of what is now Trapani, Sicily, he spotted the Carthaginian fleet at the dead of the night and decided to ambush it.

But the Romans of those days followed a tradition of divining their chances in battles by first offering morsels to the sacred hens of Rome on the deck of their flagship.

If the hens pecked what was offered to them, it was assumed that the Roman deities would give the descendants of the Trojans victory.

If they didn’t, the order for battle would be aborted and the fighting postponed to another day.

As preparations for zero hour neared, the sacred hens of Rome refused to touch the tasty morsels.

The incensed consul threw the hens into the sea, Cicero wrote, angrily exclaiming: “Let them drink, since they won’t eat!”

He then ordered his sailors to immediately attack the unsuspecting Carthaginians.

Before revealing the result of that memorable battle, let us compare the Roman consul to Turkish President Recep Tayyip Erdogan and his modern-day poultry to the Kurds of Turkey.

Most readers here already know that there was an election in Turkey on June 7.

Recep Tayyip Erdogan wasn’t even on the ballot, but still vigorously campaigned for his party’s victory as if his life depended on it!

In reality, it did: a government by another party or parties could easily have swapped his 1,000-room White Palace with a tiny dingy cell on an island prison in the Sea of Marmara.

Given the enormous stakes, he had personally handpicked 550 candidates for his party’s slate and crisscrossed the country urging voters to “elect” 400 of them as “their” representatives!

He would allow the remaining 150 members to be the deputies of other parties, not because he liked them, but because he viewed them as useful idiots who could help him masquerade the myth of Turkey as a “democracy”!

On Election Day, some Turks did actually vote for his party, but the Kurds of Turkish-Kurdistan overwhelmingly rejected his candidates, forcing his party to lose its majority in the Turkish parliament.

Furious, the usually verbose Erdogan clammed up and went into hiding for several days.

When he found his voice, again, he arrogantly rejected the will of Turks and Kurds and called for “repeat” elections on November 1.

But instead of plugging his party’s program, he scornfully threw the Kurds of Turkey under the bus by declaring an all-out war on them and their institutions.

As if on cue, flag-waving Turkish thugs raucously thronged the streets, especially on September 6-8, and viciously attacked Kurds and their establishments—while police were conveniently “busy” elsewhere.

Erdogan is now basically saying: you have to either let my party run the country peacefully or I will see to it that it does so by other means.

The signs have always been there—for those who have bothered to look—that the Turkish president had no capacity for peace with the Kurds, and that he was playing with us like a cat toying with a mouse.

Freedom—the one balanced with order—which could have been the basis of peace between the two peoples, doesn’t exist in Turkey—but that is news, alas, for the Turkish political elite that dominates Ankara with drawn guns.

A year ago, it fell to President Joachim Gauck of Germany—a former pastor from the country’s communist east—to remind a university audience in the Turkish capital that, “Until the age of 50, I lived in a system in which a communist party decided what was right and what was wrong [for the entire country].”

Then he added, “The reunification of Germany was one of the happiest [days] of my life. The era of intimidation and arbitrariness was over. The concentration of power in the hands of one party was dissolved.”

But the Turkish president instead of reflecting on the experience of someone who grew up under a one-party rule assailed him as a one-time priest who can’t resist “preaching” to others.

But doing exactly the same, he is now vowing to kill every Kurd that resists his order—including women and children—and he has been covertly doing so since March 15, and overtly since July 24.

Some of our Kurdish leaders, too clever to be wise, are, alas, responding in kind by ordering attacks on Turkish military and police installations in Kurdistan as well as Turkey proper.

He might have continued: “The death of 40,000 Kurds has already translated to six million Turkish and Kurdish votes for Kurdistan, and with a nonviolent resistance the Turkish president can be ousted faster than with a violent one!”

As to that ancient Roman-Carthage battle, Publius Claudius Pulcher was soundly defeated after disregarding the sacred hens of Rome.

So will Recep Tayyip Erdogan lose for violently assaulting the Kurds who voted against him last June!

His rioting roosters may well wind up as the figurative pièce de résistance on the dinner table of Kurds and Turks—as they feast upon the remains of Erdogan’s lifeless party.