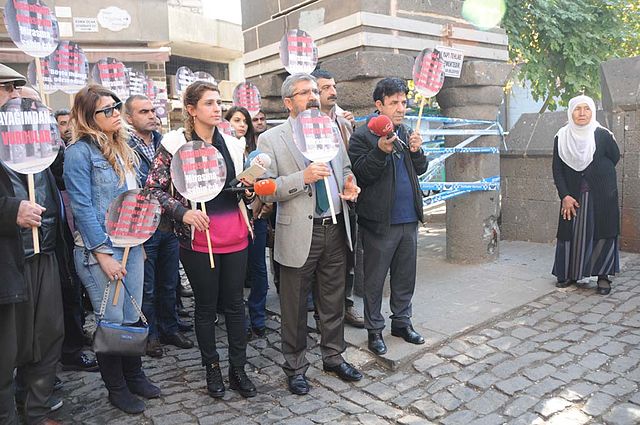 “A spectre is haunting Europe—the spectre of communism.”

So started the Communist Manifesto of Karl Marx and Friedrich Engels in 1848 and enough time has passed to say that the spectre did some good and a lot of harm when it finally showed up in Saint Petersburg, Russia, with a little bit of help from Germany.

In the ensuing tumultuous years that led to the Second World War, the Red Army broke the back of Hitler’s fascism while the Bolsheviks denied the Russians and their subjects freedom as Lenin and his successors perfected the “scientific” dictatorship of proletariat.

Today, another spectre is hunting the Middle East—this time with a little bit of help from Turkey—and it is the spectre of unadulterated Islam as first Muslims practiced it some 1400 years ago.

No one has predicted the good it could do, but the damage it has caused especially to the Yezidi Kurdish population of Mount Sinjar—enslaving its women and murdering its men—has already revealed its ugly face.

Should victory be its lot, there is a respite for the “People of the Book,” the Jews and the Christians—an inferior status, but not the Buddhists or atheists—they would be the spoils of war just like the Yezidis.

Maybe we Kurds who are fighting to curb the predatory nature of the Islamic State will eventually succumb to its unbridled violence as some of our ancestors did when the warriors of the Islam originally showed up at our door.

The signs are ominous. The threat is real. In the birthplace of writing, a group dedicated to the closing of the mind, at least socially, is attacking freedom and attracting obedient souls from around the world.

Consider the latest ferocious Islamic State attack on Kurdistan north of Mosul last week, and the relentless Turkish assaults on Kurds and their cities since last summer.

If you are somewhat familiar with the contours of the Middle East, you may find yourself asking: is Turkey in cahoots with the Islamic State, or is it the proverbial open season to go after Kurds?

The Sur district in Diyarbakir, the heartbeat of Kurdish struggle for freedom, has come under heavy Turkish bombardment involving the use of helicopters, drones, and tanks.

Targeted are not just the Kurdish partisans, but the heirloom of generations past such as the four-legged minaret of Diyarbakir, the only one of its kind, which came close to being toppled on November 26, 2015.

Two days later, Tahir Elci, the president of Diyarbakir Bar Association, appeared before the hamstrung legs and urged both sides to cease their hostilities and respect the city’s priceless inheritance.

What was the response to this message of peace? He was brutally assassinated by a two-legged monster with a single shot to the back of his head in the sight of cameras no less!

The man, who tried to rescue a unique minaret and compared it to the destroyed statues of Buddha in Afghanistan while still alive, sprawled face down—under a sign that read, “I am the heirloom of humanity; Take care of me!”

No one so far has.

That the mushrooming war inside Turkey now raging in at least a dozen districts with a population of 1,300,000 souls bears an uncanny resemblance to what is unfolding in Syria and also Iraq is, alas, news to most people who actually follow it.

What is not news, for the Kurds at least, is the sometimes-open often secret shenanigans of the Turkish government with the Islamic State to deny the Kurds self-rule.

When the Islamic State announced its intention to conquer Kurdistan, an American soldier, Jordan Matson, created a Facebook page, “The Lions of Rojava (western Kurdistan),” to recruit volunteers for its protection.

Australians such as Ashley Kent Johnson, Britons such as Kosta Erik Scurfield and Canadians such as John Gallagher joined it to give Kurds a helping hand and freedom a fighting chance.

All three returned to their homelands in body bags.

The Turks, the masters of copying others, decided to duplicate the “lions” project and came up with a shadowy group called Esedullah, which translates as “The Lions of Allah”.

Unlike foreigners who help Kurds openly, these heavily armed masked “lions” have been photographed and filmed in the streets of Kurdish cities and in the vicinity of uniformed Turkish soldiers.

They don’t have a Facebook page, not yet at least, but flaunt something better: a NATO member that covers their tracks in exchange for killing Kurds!

Here are some of their telltale signs by way of graffiti from Cizre, a Kurdish town inside Turkey, which has been under a new curfew since December 14.

“Even if we shed our blood, the victory belongs to Islam.” “If you are a Turk, be proud; if you are not, worship it. The Lions of Allah Team”

The Kurds I know have stopped worshipping other human beings. In their victory may lie the partial peace of Ankara, Beirut, Paris and San Bernardino. They deserve your support and well wishes.

The original of this oped appeared on Rudaw daily on December 29, 2015.