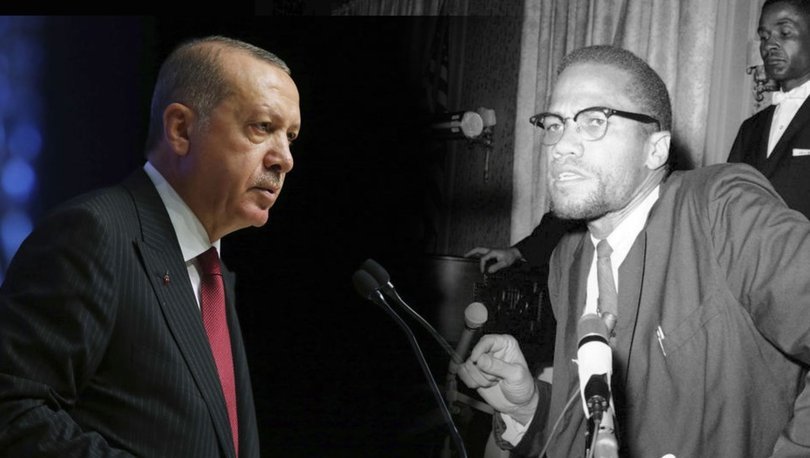 The meeting was short, but its meaning will long reverberate through the ages for Kurds as well as the students of Malcolm X.

Ilyasha Shabazz compared the Turkish leader to her late father and said, he “represents” his ideals and aspirations.

Really? If he were still alive, would her father think that? Given how Turks are mistreating Kurds, inside and outside Turkey, I doubt it.

Kurds and their friends must ask two basic questions:

One, why haven’t we Kurds been able to educate the likes of Ilyasha Shabazz that Turkey is not a democracy, but a “hypocrisy,” to borrow a word her father leveled at America before his assassination?

Two, why doesn’t Ilyasha Shabazz know that 20 million Kurds inside Turkey aren’t allowed to use Kurdish as a language of instruction in schools, because Turkey’s founding bigot, Ataturk, has declared it uncouth.

Despite our anger and Ilyasha’s lack of knowledge, some unintended good came from the meeting in New York. Ankara is changing the name of the thoroughfare on which the American Embassy sits, from 1478th Street to Malcolm X Street.

I’m almost certain Mr. Erdogan and his legions of yes-men were half asleep when they read The Autobiography of Malcolm X as told to Alex Haley or saw the Spike Lee’s film Malcolm X.

But they are fully awake when they see good propaganda.

And yet anyone who appreciates either the book or the film, and knows a little about the Kurds, would grudgingly thank Ilyasha Shabazz and Mr. Erdogan, as I do, for getting that street renamed.

But this critical question remains: What if Malcolm X had been born a Kurd in Turkey? Would he have been able to practice his strident liberation theology on behalf of the Kurds from 1952 to 1965?

The answer: Absolutely not!

Ilyasha Shabazz has declared that her people tamed the American wilderness for the white race—but fails to mention that the white race transformed her dad into a fearless defender of freedom.

“I didn’t know a verb from a house,” he confided to Alex Haley upon entering the prison. But when he became proficient in reading, “I liked the books with intellectual vitamins,” he added.

Someone needs to whisper these tidbits into the ears of thousands of Kurdish prisoners in Turkish jails. Who knows we might even see the birth of some Kurdish Xs inside Turkish prisons as well!

In a Boston prison, Malcom X became a disciple of Elijah Mohammad’s Nation of Islam, and upon his release preached its ethno-nationalist aims by declaring a war of words on the white race, equating it with the “devil.”

No one had dared to be so brazen as Malcom X, and thanks to the First Amendment, he did so with impunity, showing America its deformities and enticing those who thirst for truth.

There is the famous story of a white female student approaching him and pleading, by way of atonement, “What can I do?”

In the film version, Mr. X tells her, “Nothing.” In the book version, mercifully, we have a transformed Mr. X, after his dismissal from the Nation of Islam, declaring, “I regret that I told her that.”

A true believer, it was inevitable that he would part company with the cult-like organization’s leader: who preached one thing and did another.

On his own, he united with the larger human family, declaring, “I’m for truth, no matter who tells it. I’m for justice, no matter who it is for or against. I’m a human being first and foremost, and as such I’m for whoever and whatever benefits humanity as a whole.”

In Turkey, as a Kurd, he wouldn’t have lasted 13 days—remember Tahir Elci, and the single bullet to his brain—let alone 13 years, with his forceful message.

In America, although he angered white supremacists, he feared the Nation of Islam, telling Mr. Haley, “I knew that no one would kill [me] quicker than a Muslim if he felt that’s what Allah wanted him to do.”

Here is a harder question for Ilyasha and Qubilah: What would Turks like Erdogan do if Americans named part of Massachusetts Avenue in front of Turkish Embassy after a Kurdish dissident?

They won’t like it. Islam doesn’t do dissent unfortunately.

Perhaps the sisters should rethink about their careless praise for the Turkish leader. Kurds, for example, would certainly appreciate an apology or a message of sympathy from them.

If they engage in such a meaningful gesture, they will simply reaffirm their father’s unflinching and exemplary devotion to the cause of freedom in the world.

They should also realize this: renaming a street is easy; defending freedom is not.