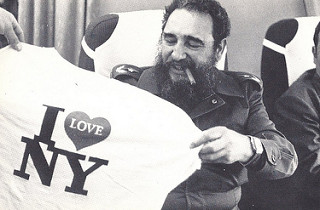 The Peoples Democratic Party (HDP) and the Kurdistan Communities Union (KCK) each issued statements hailing Mr. Castro for his contributions to “freedom” and “democracy.”

Are we talking about the same fellow?

Isn’t Castro the despot who ruthlessly murdered hundreds by firing squads—the operative word was Pa-re-don (to the wall), and brutally locked up thousands more without trial?

Do Kurds, while seeking their own freedom, really want to hang a gleaming halo around a tormentor of liberty?

Despite teeming facts to the contrary, the HDP honored Fidel’s “lifelong contributions to freedom, socialism, and revolutionary struggle throughout the world.”

The statement also praised Che Guevara as an inspiration for “everyone who struggled against fascism and dictatorships.”

The KCK, the umbrella organization that includes Kurdistan Workers’ Party (PKK), went beyond and bestowed two pages of superlatives on the oppressor of freedom.

Leaving aside the ideology of brute-force socialism that has failed miserably from Cuba to North Korea, did Castro and Guevara bring democracy to Cuba?

Did the Cuban people elect Fidel president for 47 years?

Did they elect Fidel’s brother Raul to rule them once Fidel was unable to?

Very few people believe this silly charade that the HDP and PKK have sadly swallowed.

They have locked arms with Kim Jong-un, the dear North Korean leader for life, who declared a three-day mourning for the Cuban leader in Pyongyang.

The KCK statement had this priceless nugget:

“Like the Cuban people, the Kurdish Freedom Movement has also proven that no obstacle can stand in the way of passion for freedom and democracy, and has fought and reached victory…”

Did I miss the victory parades of PKK in Amed, Kurdistan?

Did I overlook the solidarity parties of their friends in Havana, Cuba?

In the cursed year that is about to end, Kurdish cities of Sirnak, Cizre, Amed, Farkin, Nusaybin and Gewer were violently steamrolled!

To his credit, Fidel Castro didn’t initially set out to be a dictator for life.

He first embraced freedom and democracy—even joined the anti-communist Partido Ortodoxo to represent a Havana district in the election of 1952, but never became a member of Congress.

General Fulgencio Batista, a one-time president of Cuba, took over the government by cancelling elections, backed by the armed forces.

Cuba may have been symbolically free, but American and European interests largely controlled its economy and destiny.

In the large Oriente province, “The lands of the United Fruit Company and the West Indian Company link the northern and southern coasts,” noted Castro.

“The brutality of the police, the government’s indifference to the needs of the people for education, medical care, housing, for social justice and economic justice … is an open invitation to revolution.”

That revolution exploded a year after the banned elections, and Mr. Castro was its spearhead.

But the revolution was aborted when General Batista arrested the Castro brothers.

Many of their comrades were summarily executed, but the Castros served a year in prison before going to Mexico to organize their final uprising.

While in Cuba, Fidel defended himself in his “History Will Absolve Me,” which approaches Cicero’s Philippics or Plato’s Apology in its majesty and grandeur.

“I come to the close of my defense plea but I will not end it as lawyers usually do, asking that the accused be freed,” Castro declared.

“I cannot ask freedom for myself while my comrades are already suffering in the ignominious prison of the Isle of Pines.

“Send me there to join them and to share their fate.

“It is understandable that honest men should be dead or in prison in a Republic where the President is a criminal and a thief.”

While Cicero and Socrates met their deaths soon after their alleged “crimes” in Rome and Athens, Castro lived 63 additional years to exterminate freedom and democracy from the island of his birth.

Comrade Che Guevara wrote his mother that he was leaving “the path of reason” to embrace revolutionary violence.

Someone should have whispered into Che and Fidel’s ears that the path of violence is equally fraught with failure. Che was assassinated in 1965 in Bolivia while fomenting revolution there.

Or resist it nonviolently, as Gandhi did, liberating India with least pain and bloodshed from the clutches of Great Britain.

That is a fine example for Kurds to follow.

It will splendidly bestow a proud legacy of freedom and nonviolence to our children and the world.

December 14, 2016
Kani Xulam on Twitter: @AKINinfo
The original of this op-ed first appeared on Rudaw daily.