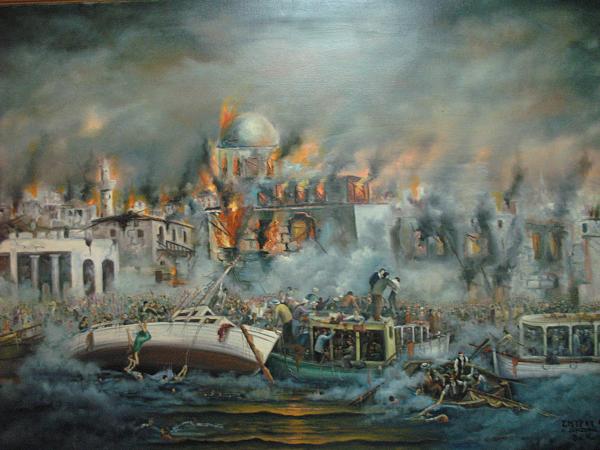 “If we have no peace, it is because we have forgotten
that we belong to each other.” –Mother Teresa

Kurds should probe her sensational new book, Turkey, the Insane and the Melancholy, which painstakingly traces Turkey’s far-reaching history of oppression against its peoples, especially the Kurds.

Ms. Temelkuran, who was fired from her newspaper Habertürk in 2012 for digging her spurs too deep into President Erdogan, now unleashes fresh salvos against his dictatorial policies.

Her book “gives a fascinating if frightful insight into reasons why Turkey is becoming an authoritarian state,” declares Patrick Cockburn, an award-winning Irish writer on the Middle East and author of The Rise of the Islamic State.

This knotty relationship between Turks and Kurds, and their interface with the world, is the running theme of her book. It starts with a major blind spot in Izmir, the author’s birthplace, and continues on a hopeful note in Mersin, for the Kurds, that they have what it takes to outsmart their cruel foes, her Turkish folks.

If you are a friend of freedom, you pray that her prediction of eventual Kurdish deliverance comes true.

You also hope that she can withstand the relentless slings and arrows hurled her way by President Erdogan and his slimy toads.

They have made her life a living hell, as they have devilishly done for millions of Kurds who had the misfortune of being born in Turkish Kurdistan.

There is a difference though.

Kurdish dissidents are hunted and killed like rabid dogs. Turkish ones like Ms. Temelkuran are simply harassed or driven into exile.

I once asked Baskin Oran, a Turkish professor and staunch critic of Erdogan, if he thought his Turkish identity protected him from fatal bullets, since Tahir Elci, a Kurd and critic of Turkish system, had just been gunned down in Amed with a “stray” one to his head!

The good professor ignored my question.

He could have come clean by saying, “My struggle, Turkish freedom, doesn’t mean Kurdish liberty. The likes of Mr. Elci will never feel safe in Turkey. Kurds cannot be free in someone else’s country with someone else’s language and under someone else’s flag and laws.”

Turkish intellectuals do not take kindly to Kurds who needle them at International forums.

Ece Temelkuran is the same. She once wrote an entire column belittling Kurds for undertaking a campaign of “Thank you, America” for ridding Saddam Hussein from our lives.

With Saddam’s demise, Iraqi Kurds have acquired a status that is the envy of Turkish Kurds.

But Ms. Temelkuran’s dislike of America got in the way of seeing what a Saddam-free Iraq has meant to the Kurds.

If what happened in Iraq had happened in Turkey, Turkish Kurds would definitely have made a dash for liberty and forever freed Ms. Temelkuran’s compatriots from the charge of habitually tormenting the Kurds.

As to Ms. Temelkuran’s blind spot, it centers on the largest park in the center of Izmir, the historic 4,000-year-old port city, which provided Ms. Temelkuran with some fond childhood memories.

In her book, she calls it a “forested park,” perhaps an apt name to cover the shameful Turkish atrocity that erupted there in 1922.

She says she only recently learned that the park grounds were once home to thousands of Armenians and Greeks who were forcibly driven away from their homes and businesses.

Some were raped and many more violently pillaged as survivors sought refuge in Greece while a fiery nine-day inferno consumed their dwellings, scorching a prime 100 acres into shocking ruins.

Years later, the area was turned into a green space and named “Kulturpark,” which translates as “Culture Park” in English!

But Ms. Temelkuran cannot muster the strength to share the official name of the park with her readers.

Towards the end of her book, she struggles with a sort of half- answer:

“There is a considerable distance between what you will tell a foreigner about your country and what you will tell a fellow citizen, no matter how much you try to close the gap. The more the writer considers that gap, the more she feels like she is betraying the truth, if not the homeland.”

Sorry, Ms. Temelkuran, lies are what betray the truth.

The truth never does.

An honest writer would tell the truth, whatever the cost to his or her homeland.

Homer was Greek, but he belonged to humanity first. So do Faulkner, Tolstoy and Shakespeare.

Humanity, not geography, should be the boundary in our heart.

Our humanity should be what the great Louis Pasteur said of science:

“Science knows no country, because knowledge belongs to humanity, and is the torch which illuminates the world.”

Too bad Turks often use torches to destroy humanity—rather than knowledge to benefit it.

I have met the children of those who once lived in the torched Armenian and Greek districts of Izmir. Telling them what the Turks did with their properties is serving truth, bitter as it may be, which can heal both the oppressed as well as the oppressor.

But she visits Amed, my hometown, and talks to a group of lawyers who tell her Kurdish tales.

One cut her to the core.

A Kurdish lawyer is sitting on a bus beside an old man when Turkish soldiers stop the bus. The old man, out of habit, flashes his identification papers.

After they leave the scene, the lawyer tells the old man he should have waited for the soldier to ask for his ID.

The old man responds with the story of a farmer who took his ox to market, where prospective buyers always checked his teeth.

It happened so much that the ox soon began broadly grinning like a possum whenever a buyer came near.

“That is what has become of us,” says the old man to the Kurdish lawyer.

Farmers are still relatively safe in Turkish Kurdistan unless they are accused of aiding and abetting Kurdish guerrillas. But the curious types, such as students of politics, aren’t.

One of them is Zulfikar Tak, a survivor of Amed Military Prison.

Ms. Temelkuran says of him:

“I cannot find it in myself as a human being to write the words. Zulfikar Tak rendered in pencil the humanly incomprehensible tortures inflicted by soldiers brandishing truncheons reading, ‘Allah is not in, the prophet is on vacation!’ I suggest that you type his name into Google and see what comes up.”

I Googled his name, and a litany of grim horrors arose.

You don’t hear cracking Kurdish heads, but the sights are enough to ban Turkey from your list of countries to visit so long as Kurds are its oppressed subjects.

But another story she tells will cling to you like a dark shadow. It involves the brutal execution of a lover of abandoned dogs and cats by a heartless shopkeeper in Istanbul.

Nuh Koklu, 46, a journalist, was fired from his work right after the Gezi Park protests of 2013.

Again, in her words, “He would buy pet food from a grocery store and leave it on the street so that stray animals wouldn’t die of hunger on cold, snowy winter nights.

“As he was returning home late one night on an evening when he had protested against Internal Security Law, which would give incomprehensible authority to the police, he and his friends started to have a snowball fight.”

When a snowball hit the display window of the pet food store, the grocer charged out and stabbed Nuh Koklu to death.

Where did the shopkeeper get the idea that he could kill a citizen without even bothering to call police?

From President Erdogan himself!

After Gezi Park protests, he furiously declared that, “my shopkeeper, if needed, will be an enforcer of law and order.”

Nuh’s last-gasp words were the most telling.

“Please,” he groaned with his dying breath to his girl friend, “let this be a dream!?”

Millions of Kurds have been saying the same thing about Turks who have ruined their lives and killed their loved ones.

But the killing continues.

Sadly, it is not a dream.

It is a never-ending Turkish nightmare!