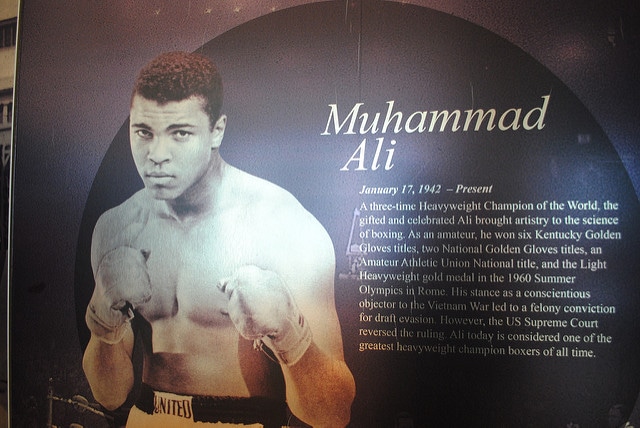 “Anything is better than lies and deceit!”
― Leo Tolstoy, Anna Karenina

Is there no limit to the pool of deceit that Turkish president Recep Tayyip Erdogan won’t dive into—and pop up lying even worse?

His latest devious dip into the make-believe world came in an op-ed piece he penned for Bloomberg News, capitalizing on Muhammad Ali being a Muslim.

Mr. Erdogan cites the American boxer’s belief in “liberty, equality and solidarity,” praising him for having “no quarrel with them Viet Cong,” and for “not going 10,000 miles from home to help murder and burn another poor nation.”

This’s such sick joke that it is obscene!

If Mr. Erdogan wants to masquerade as a champion of “liberty,” he doesn’t have to travel 10,000 miles to do so.

A shorter trip, 400 miles or so from Ankara, to the Sur municipality in Diyarbakir, a province in southeast Turkey, should suffice!

He can stop killing Kurds, and support their struggle for independence against the Turkish army!

He can remove his hypocritical blinders by heeding a recent report by Sebnem Korur Fincanci, president of the Human Rights Foundation of Turkey, who chronicles the “murder” of “another poor nation.”

But she is referring to the Kurds being murdered by Erdogan’s goons.

Some of her findings will make you sick.

She catalogs the deliberate burning of as many as 178 civilians in Cizre, including a child, and another—a survivor, according to a later report, was handed a “bag of bones” that were once his dad!

Bloomberg News should have examined that report—before foolishly letting Mr. Erdogan impersonate a man of peace!

Men like Rabbi Lerner are rare and we should thank Muhammad Ali for picking him to eulogize the nonviolent champion of peace in Louisville, Kentucky.

No such luck greeted some 9,000 “humanitarians” who gathered in Istanbul for the first World Humanitarian Summit (WHS) last month.

Although the United Nations was host, the Turkish president acted as the leader of the ill-guided pack and welcomed them to his country as if he were its sultan.

He vowed to “never close our doors to humans or humanity” and “continue to work” for peace.

“Continue”? Why then engage in opposite statements such as, “The martyrs’ hills will never be vacant.”

He also pledged to “pursue bloody dictators to make sure they account for their crimes against humanity.”

Well, he won’t have to go far to do that. He can begin looking in the mirror.

But the self-deluded “humanitarians” of UN, unencumbered by his record, interrupted the Turkish leader with prolonged absurd applause!

They represented 173 countries—unbelievably, 55 of them heads of states, including Angela Merkel of Germany.

Thankfully, none were leaders of major powers such as Japan, China, Russia, Great Britain, France or the United States.

Doctors Without Borders refused to go, as did Turkish human rights organizations critical of Mr. Erdogan’s war on Kurds.

Some 8,000 Turkish police lurked in the shadows, providing protection for the do-gooders, just in case.

Some of these dazzled Kurds would have definitely shocked the sleepwalkers to the point of throwing up!

Turks are used to “respecting” their leaders—or facing hell.

Too bad Erdogan and his ilk can’t be subjected to the sarcastic ridicule that Americans hurl at Hillary Clinton and Donald Trump.

The same should apply to the clowns running the United Nations.

UN Secretary General Ban Ki-moon was certainly aware of Cizre burnings and should have been alarmed when the Turkish human rights organizations declined his invitation to be at the World Humanitarian Summit (WHS).

He should have shown the courage of Mohammad Ali and declined the invitation by writing:

Cicero once noted that If God could speak on earth, he would speak like Socrates.

None of Socrates’s writings survive, but his student Plato tells us Socrates boldly declared at his trial:

“The unexamined life is not worth living.”

I have come to appreciate the wisdom of the Greek sage and have decided to “examine” my life.

A brash American, John Bolton, has helped me by declaring:

“The Secretariat building in New York has 38 stories. If it lost ten stories, it wouldn’t make a bit of difference.”

I work in the Secretariat, and have reflected on Mr. Bolton’s undiplomatic candor.

Notwithstanding his gripe, it is pretty clear to me that a wide gulf separates the expressed ideals of our charter from its dismal practice.

I have decided to do something about the gulf beginning with our first World Humanitarian Summit (WHS).

Our charter starts with “We the Peoples” and yet your country, Turkey, wages a pitiless war against one of those peoples, the Kurds.

We have Syria, Yemen and Afghanistan on our agenda and yet the plight of Kurds in Cizre, Sur and Sirnak is hardly any different.

We at the United Nations consider the siege of cities as illegal and yet your army still engages in the illegal sieges of these Kurdish towns and cities.

Since the goal of our summit is to prevent conflict, honoring your hospitality will do irreparable damage to the UN charter and to me as its caretaker.

Therefore I have decided to cancel our gathering in Istanbul.

Sadly, Ban Ki-moon is no Muhammad Ali, and irresponsibly went to Istanbul to validate Mr. Erdogan’s ambitions to be the royal potentate of the Turks.

But Mr. Erdogan poked his finger in the UN’s eye—refusing to even sign the Joint Statement of World Humanitarian Summit.

“You lay down with dogs—you get up with fleas!”

This article originally appeared in counterpunch.