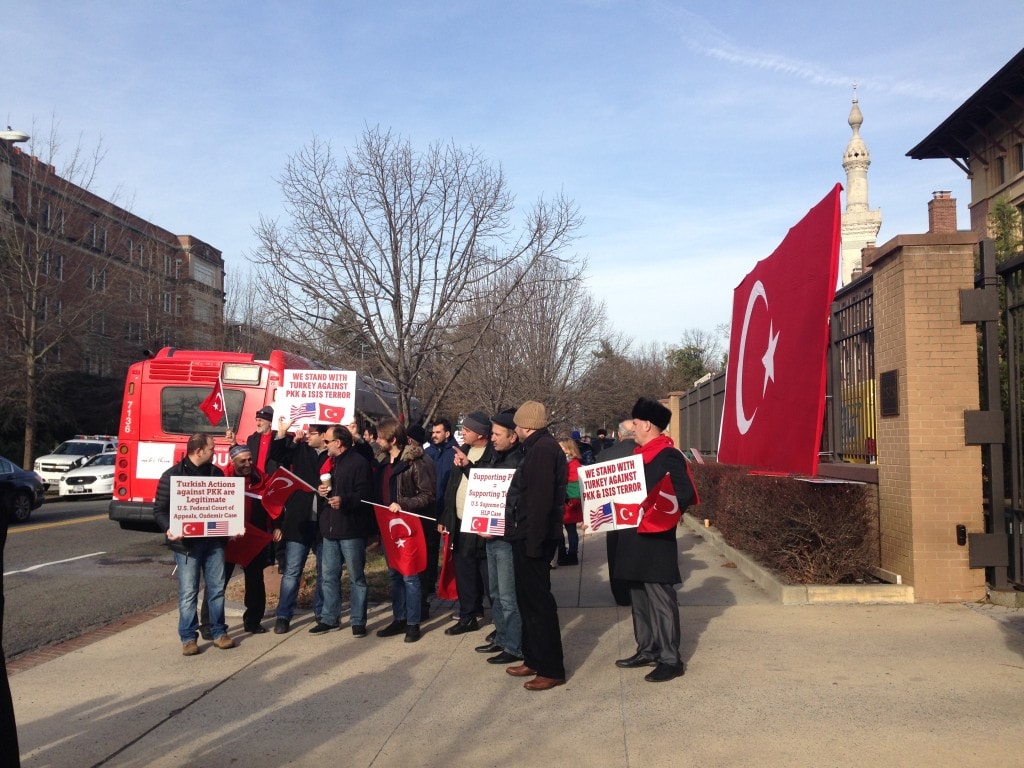 we started our day at 9:30 am in front of turkish embassy.

a group calling itself turkish american national steering committee (tansc) had heard about our vigil and had decided to protest our presence. they had shown up at 8:00 am.

metropolitan police department of washington, dc, had decided to give them the embassy side of the massachusetts avenue and gave us the grassy area in front of japanese embassy facing them.

we welcomed their presence and hoped their numbers would add “value” to our vigil, at least for the media purposes. we were not disappointed.

close to 100 flag waving turks faced 20 or so patriotic kurds. we also had some americans.

tansc had also hired two trucks with display ads going up and down the massachusetts avenue, supposedly, equating us with daesh, the islamic state cutthroats!

yes, they think the kurdish activists who want to honor dr. king and began their open-ended vigil on his birthday are somehow secret admirers of daesh!

it reminds me of a quote from plato from my college days (as best as i can remember it), “those who criticize others captiously betray their own proclivities inadvertently.”

they are of course on a fool’s errand to equate us with daesh.

dr. king put it better than i can: “i believe that unarmed truth and unconditional love will have the final word in reality.”

as we were setting up our banners, a woman from the turkish side came to us and approached me with a question in turkish: are you an armenian?

turkish bigots are never good in school, and i thought, since she was trying to insult me with her language, i should respond to her in english, a language that i thought would rattle her and make her regret that she had crossed paths with yours truly.

“it doesn’t matter, does it?” i said. “your intentions are not pure. freedom of speech doesn’t give you the right to vomit as such!”

english was not her forte. she left me as i thought she would. i also told a police officer nearby that her intentions were belligerent and she might mean trouble later on.

once our signs were up, we started our press conference a little bit after 11:00 am. (a kurdish website is going to publish a slightly altered version of our statement shortly. we will post it as well.)

i just got a phone call, 4:30 pm, that the turks have abandoned their site.

i knew we would outlast them.

the love we feel for our people’s liberation struggle will always triumph the hatred some turks feel towards it!

oh, we have come up with two twitter hashtags: #kurdshonordrking and #kurtlermartinlutherianiyor

tomorrow is saturday. we will be across turkish embassy from 9:00 am till 5:00 pm. consider volunteering for us by staffing our vigil site. you would be honoring kurds and dr. king.