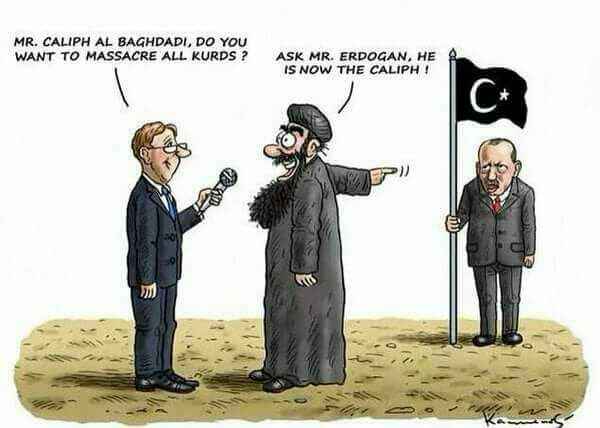 Fighting between Turks and Kurds is nothing new. But the latest assault by the Turkish army on the Kurdish province of Afrin inside Syria bodes ill for the region—just when things appeared to be looking up for the peoples of Syria.

As Kurds who had played a decisive role in the demise of the Islamic State, we held hope (and still do)—with our hands on our arms—that a humbled Syria might adopt a new constitution that recognized the basic human rights of all of its citizens, including our people.

But in Afrin that hope is now being bombarded by Turkish jets and artillery fire with a little bit of help from some jihadi groups and even Moscow. The area is on the western side of the Euphrates River and falls under the Russian sphere of influence.

The Americans who control the eastern side of the Euphrates may have inadvertently started this war when they stated—seven days before the attack—that they were getting ready to train a local Border Security Force to stop the re-emergence of the Islamic State.

The Turks went ballistic upon hearing the news (local meant Kurdish for them) and threatened to invade Afrin, even though Afrin was not in the American zone of influence. The Pentagon’s unhelpful comment that Afrin was on its own paved the way its present predicament.

For Kurds, who live on both sides of Euphrates River, the idea of “protectors,” though welcomed at first, was also unnerving, to say the least. Their desire to live in a democratic Syria hasn’t resonated in Moscow or even Washington.

While the superpowers were dividing Kurds and Arabs into their respective zones of influence, Ankara had another plan for the Kurds. It simply couldn’t tolerate them with enhanced political rights in postwar Syria.

When the Assad family’s control was strong, Turkey didn’t even bother with the plight of the Syrian Kurds. Now that Bashar al-Assad has become weak, Turkey is waging a war to give him a helping hand. Turkey’s rulers have never come to terms with the idea of free Kurds or freedom-advocating Kurdish leaders.

Before this latest Turkish foray, the province of Afrin was considered “lucky” for avoiding the ravages of war. When Damascus felt threatened in 2012, it withdrew its forces from the region, enabling Kurds to run their own affairs and even offer refuge to Arabs fleeing conflict in other Syrian provinces.

Deputy Prime Minister of Turkey Bekir Ozdag cited Article 51 of the Charter of the United Nations as a reason for the invasion. That article says nations have a right of self-defense. But the Kurds were not assaulting Turkey; in fact, they wanted to have a friendly relationship with Ankara the way Mexico does with the United States.

But the offer of peace notwithstanding, the war has come to Afrin and it started with a press conference of Hulusi Akar, the chief of staff of the Turkish Armed Forces. He vowed to destroy YPG (the Kurdish militia) and Daesh (the Islamic State). He repeated the word Daesh, adding, “This is important.”

It is, of course, obscene to compare Kurdish fighters with Islamic State cutthroats. Kurds and Americans worked together to fight the Islamic State in Kobane, Gire Spi, Manbij and Raqqa. But the Turkish chief of staff wants to be in good graces of the West, which supplies his pilots with the fighter jets that are destroying Afrin.

Turkish chief of staff Akar had other “gems” for his audience. He called the operation to invade Syria, “Olive Branch.” Ankara is bombing another country, but says it is doing peace a favor. The charade calls to mind the famous observation of Tacitus, “They created a desolation and called it peace.”

The usually taciturn chief of staff went on, saying, “Our army is known as the “Furnace of Prophet.”’ That is what the Ottoman sultans called their armies as well. Does NATO know that it has a religious army in its ranks now?

Not to be outdone, Ali Erbas, the head of the Department of Religious Affairs, ordered the recitation of Al-Fath, (“the Conquest,”) chapter of the Quran (48), in 90,000 Turkish mosques.

In Turkey, it doesn’t matter that Kurds are fellow Muslims. It also didn’t matter that Saddam Hussein had done something similar when he gassed the Kurds inside Iraq and blessed his operation with another chapter of the Quran (8): Al-Anfal, which translates as “the Spoils” of war.

And yet none of the Muslim leaders representing the faith of 1.6 billion people have so far issued a statement condemning this blatant abuse of their religion. But some clueless Muslims in Africa, Turkish president Recep Tayyip Erdogan was quick to note, have, alas, joined the Turks with their own prayers for the success of the Turkish army in Afrin.

For Kurds, it is not the enmity of the Turks or their clueless friends, but the indifference of the world that cuts the deepest.

One Facebook friend put it this way: “If I were representing PYD [the Kurdish militia], I would announce the return of Raqqa to the Islamic State!”

Kurds who are struggling hard to keep Turks, Arabs and Persians out of their hair sometimes get sentimental and say, “We are fighting for humanity!”

Their larger than life braggadocio makes me smile, but let’s give credit where it is due: Kurds have shed more blood, at least in Syria, than anyone else to defeat the Islamic State cutthroats. In doing so, they naturally feel, they have contributed to the peace of Paris, London, Brussels, Berlin and New York.

The Kurds of Afrin have been resisting their invaders the way their compatriots did in Kobane in 2014. There, the American military tipped the scales in their favor when it provided them close air support, which saw the beginning of the end—for now at least—of the Islamic State of the Middle East.

The Kurdish-American alliance has benefitted both sides. In the battle for the capital of Islamic State, the Kurds and their Arab allies sacrificed 650 of their sons and daughters. No American died in the liberation of Raqqa.

Did the Kurds err to shed their blood like water for the peace of New York, Paris, London, Berlin and Brussels? The West can still help Afrin for the sake of the stability in Syria and the cause of peace in the world.