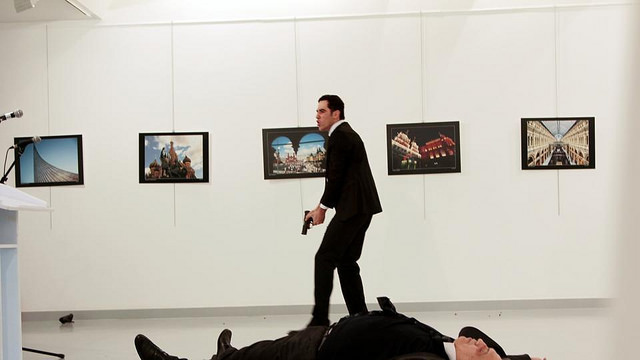 Is shooting an unarmed man courageous?

Is shooting him in the back manful?

That’s what one Turkish man did, whose name means courageous, manful, red-blooded and trustworthy in English.

Cold-blooded, back-shooting murder is neither red-blooded nor courageous to me—especially shooting an unarmed, defenseless man in the back eight times!

Crowning his cowardly act, the killer scornfully shouted, “God is Great” and “We are the ones who have pledged loyalty to Muhammad to fight jihad as long as we live.”

Altintas was a member of Cevik Kuvvet, a crack unit in the Turkish police that sometimes acts as a protection detail for Turkish VIPs or foreign diplomats.

But instead of protecting Karlov, Altintas deliberately murdered him—while screaming a rant of Jabhat Fateh al-Sham, an affiliate of al Qaeda in Syria.

The assassination sparked fears it might incite war between Moscow and Ankara, like the 1914 murder of Archduke Franz Ferdinand of Austria triggered World War I.

There is no sign of that yet, but the homicide has spawned uneasy tiptoeing around Mideast peace that is as brittle as parchment paper.

Moscow dispatched eighteen investigators to probe the murder of its envoy, and the Turkish government submitted to the invasion as if bowing to the dictate of a colonial master.

Turkey prostrated itself even further:

Foreign Minister Mevlut Cavusoglu announced that the name of Karyagdi Street where Russian Embassy is located will be renamed Karlov Street to honor the slain diplomat.

The city of Ankara declared it would name the room in the Contemporary Arts Gallery where the Russian envoy was murdered Andrei Karlov hall.

If you are new to the conduct of nations, as we Kurds are, these groveling gestures by Turks to placate the Russians serve as “healthy” signposts of Turkish power relative to the Russian bear.

But Turks can also be entertaining in the midst of warlike conditions.

The Turks lost the game 3 to 1, but then threw up a losing argument!

They unfurled two large banners proclaiming the eternal love of Turks for Russians in block letters: “An American Bullet Can’t Kill the Friendship of Turks with Russians!”

That was screwball Turkish propaganda:

President Erdogan ridiculously pointed his finger at Fethullah Gulen, the Turkish cleric of Saylorsburg, Pennsylvania, as the mastermind behind the murder.

Some in the Turkish media even accused the CIA, while others suspected NATO members for wanting to torpedo the budding Turkish-Russian relationship.

“Any notion that the United States was in any way supportive of this or behind this or even indirectly involved is absolutely ridiculous.”

As expected, Mr. Gulen categorically denied any involvement, declaring he was “shocked and deeply saddened” by the assassination, adding, “I condemn in the strongest terms this heinous act of terror.”

With claims and counter-claims like these, you can be forgiven to lose faith in Turkish attempts to find the real killer of the Russian diplomat.

The Russians should look into one of the poems that Turkish police cadets recite at graduation.

One by Arif Nihat Asya has these lines:

“You are at an age when Mehmet the Conqueror subjugated Istanbul…”

Is it true that everyone is talking about the Turks? Are they really everywhere as the poet says they are? Or are they really number one in everything that they do?

In case these young cadets had some sisters at the graduation ceremony, the poet has some lines for them as well:

“My daughter, you are at an age to give birth to the likes of Mehmet the Conqueror…”

Any halfway-decent psychologist would tell you that a student who swallows such absurd fantasies is bound to be missing a screw or two.

That just proved itself true in Ankara, Turkey!