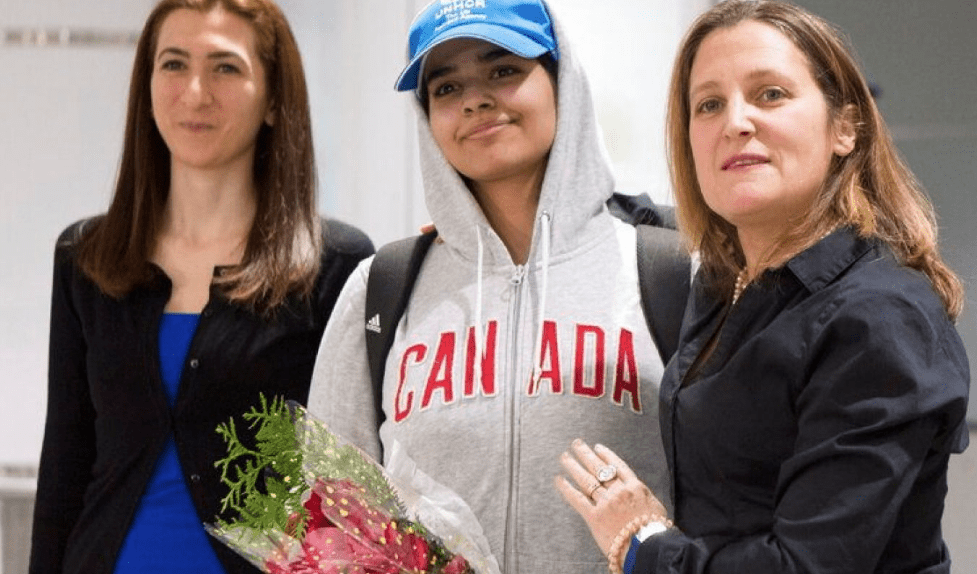 The first Saturday of 2019 didn’t start well for Rahaf al-Qanun, the Saudi teen, who wanted to make a dash for freedom in Australia via Thailand.

The forces of “order” blocked her path in the Thai capital.

On the second Saturday, January 12, she landed at Toronto Pearson International Airport in Ontario. Chrystia Freeland, the foreign minister of Canada, was among those who welcomed her to her new homeland.

What catapulted this unknown Saudi teen into stardom is an incredible story of freedom and its glorious victory with the help of Twitter, journalists and ordinary people with smartphones all over the world.

Steve Jobs, the child of a Syrian immigrant, can rest in peace for gifting humanity a splendid invention. If awards were given to gadgets, his would have garnered the liberty’s highest honor.

Rahaf al-Qanun, the daughter of an Arab governor in Saudi Arabia, grew up in the lap of luxury and took advantage of what the Kingdom of Saudi Arabia offers to its privileged youth: education.

But the more she expanded her mind, the less she liked her country. Wealth had put her in a class of its own with severe restrictions, but she wanted to be free—and if needed poor.

Her sex was a liability. She refused to accept her lot.

She plotted an escape plan and as luck would have it, her family went on a trip to Kuwait. In the more liberal Arab state, she was able to board a plane for Australia via Thailand and landed in Bangkok on January 5.

In the Thai capital, her passport was confiscated. She was placed in a hotel room and told: she would have to wait till the notification of her relatives.

Rahaf al-Qanun was trying to put a distance between herself and her relatives in Saudi Arabia. She had already violated her country’s strict laws by flying solo. She was not a masochist and was not going to volunteer for it.

In her hotel room, she set up a Twitter account and began tweeting—first in Arabic and then in English—that her life was in danger and she didn’t want to do anything with the country of her birth.

Those who received her tweets and re-tweeted them to journalists didn’t need convincing that her life was indeed in danger. The stories of Dina Ali Lasloom and that of Jamal Khashoggi were still fresh on their minds.

Dina Ali Lasloom, a Saudi woman, had also wanted to make a dash for freedom in Australia via Philippines. Arrested in Manila, she was flown back to Riyadh, a day later, with her mouth taped and arms and legs bound like some wild animal.

That was 20 months ago—and no one has heard from her since.

Jamal Khashoggi, a Saudi journalist, had met a violent end at the Saudi consulate in Istanbul, Turkey.

That was three months ago—and his loved-ones are still waiting to bury his missing corpse.

That savage act had galvanized the world public opinion against the kingdom and it looked like, Rahaf al-Qanun, might, with a bit of luck, become its first deserving beneficiary.

The tipping point came when Sophie McNeill, an Australian reporter, saw one of her distressing tweets and flew to the Thai capital and offered to barricade herself in the same hotel room with her.

With a lover of their common sisterhood on her side, her tweets became more potent, and the photos and videos more graphic.

In a ten-second video soon seen by more than a million people, an anxious Rahaf al-Qanun looks into her smartphone’s camera—held by her new sister Sophie—and eloquently states:

“I am not leaving my room till I see someone from United Nations High Commissioner for Refugees (UNHCR). I want asylum.”

With thousands following her case live, the Thai officials were compelled to let the UNHCR personal meet with her. Well versed with the plight of women in the kingdom, they took her into their custody, as was their mandate.

They appealed to the Australian government on her behalf, but were told she would not be treated differently and must get in line behind 25.4 million other asylum seekers in the world.

Meanwhile, the Saudi Chargé d’affaires in Bangkok was doing his best to thwart the plans of Rahaf al-Qanun. He conceded to one huge blunder on the part of his hosts: “They should have taken her smartphone instead of her passport.”

Not wanting to take chances with the life of Rahaf al-Qanun in Thailand, the UNHCR personal reached out to the other embassies for help. Canada offered to process her paper work right away, enabling her to fly to Canada one week after landing in the Thai capital.

An Egyptian journalist, Mona Eltahawy, said of the climactic moment, “Mark my word: Rahaf al-Qanun is going to start a revolution in Saudi Arabia.”

I don’t know. What I do know is this: if you are a female Muslim and feel the oppression of the male members of your family and society, invest in a smartphone and befriend a smarter journalist like Sophie McNeill.

They are your tickets to freedom, for now that is, until we make the Middle East safe for all its children.