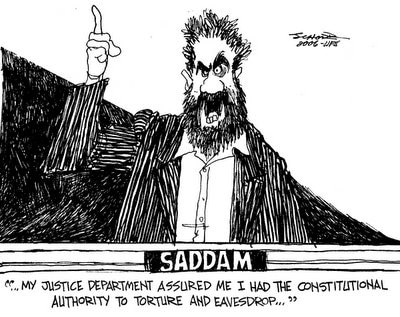 But when you throw a CIA interrogator into the mix, curious things can pop out.

“He will find that everything he encounters needs pounding.”

When CIA analyst John Nixon began pounding on Mr. Hussein for a month of interrogation, many interesting things popped out, as told in his new book, Debriefing the President: The Interrogation of Saddam Hussein.

Some were expected; many, apparently, were not.

CIA agents are noted for their steel-tipped nerves, but Mr. Nixon’s mettle generally melts away under Mr. Hussein’s sneaky charm.

“Instead of finding the ‘Butcher of Baghdad,’ I found myself talking to this aging Iraqi grandfather,” Mr. Nixon told Amy Goodman on her TV show Democracy Now.

This “grandfather” had stopped running Iraq and was busy writing novels when America was about to invade his country.

Surprised by Mr. Hussein’s love of books, Mr. Nixon asks him to name his favorite novel?

“Think about it. A man, a boat, and a fishing line. These are the only ingredients to the book, but they tell us so much about man’s condition.”

There is an allusion to rape in The Old Man and The Sea, where the protagonist, Santiago, excuses evils of the sea by saying, “If she did wild or wicked things it was because she could not help them.”

Was that the inspiration for Mr. Hussein to submerge the Kurds with poisonous gas?

The excusing reference escapes Mr. Nixon, but it doesn’t stop Mr. Hussein from driving his point home, telling his interlocutor that America has done a terrible wrong and will go home in 2008!

He misses the date by three years.

“It is hard to know the Iraqi people without knowing its weather and its history,” Mr. Hussein muses at one point. The difference is “between night and day,” he says, declaring Iraqis are “hardheaded because of summer heat.”

“When it is hot,” he says, “they might revolt against you. The summer of 1958 got a little hot [and the Hashemite monarchy got toppled]. In the 1960s, when it was hot, we had a revolution. You might put that in parentheses for President Bush.”

He checkmates Mr. Nixon when he declares, “any attempt to introduce religion into government and politics will insult the religion and will damage politics.”

This is a veiled threat about the growing (Sunni) jihadi menace in Iraq, which was rapidly fusing with the diehard Baathists of Mr. Hussein.

It is also a reference to America’s auspicious “wall of separation” principle between church and state, Mr. Nixon says, adding:

“As I tossed and turned one night, I wondered where our analysis had come up so short. How was it that the Butcher of Baghdad feared the Sunnis who formed the backbone of his support?”

Actually, he didn’t. He was playing situational politics and dangling the jihadi threat as a bargaining chip to convince his interlocutor for better perks, and perhaps house arrest instead of prison.

Their parting scene sparks even worse insults from Mr. Hussein:

He tells Mr. Nixon to be “just and fair” when he got back to Washington, because “these are the noblest qualities any human being possesses.”

Mr. Hussein knows no more about being “just and fair” than Paris Hilton does about celibacy!

And Mr. Nixon, instead of exposing Mr. Hussein, as a disgrace to the human race, becomes his apologist, painting the butcher as a kindly grandfather who loved American novels.

What should Kurds make of these whitewashing whoppers?

Was it “just and fair” when Mr. Hussein’s air force dropped chemical and biological weapons on the city of Halabja?

To his credit, Mr. Nixon asks him this very question, but Mr. Hussein says the order to gas the city wasn’t his, but came from General Nizar al-Khazraji.

What did he think about it?

He claimed to be “furious.”

But “not because it was a human rights violation to attack innocent civilians, but because the attack came in a section of Iraq sympathetic to the Iranians,” writes Mr. Nixon.

“Saddam feared, accurately, that the Iranians would trumpet the news of chemical weapons use to focus international outrage on Baghdad,” and they did.

For all his cleverness, Mr. Hussein can’t escape the noose and is promptly hanged when handed over to his “hardheaded” compatriots.

Ten years later, Mr. Nixon says of him, “This is what happens when we remove Saddam from power. It’s like ripping the manhole cover off the sewer and seeing what crawls out.”

“The violence of revolutions is generally proportioned to the degree of the maladministration that have produced them.”

Despite his cruelty, did Mr. Hussein have any qualities worth noting?

One, when Americans asked him to broadcast a statement urging the insurgency to cease its operations, he said, “My dignity does not allow me to read it.”

Two, “Historians are like people who could see through the dark.”

Mr. Hussein definitely didn’t see through the darkness, but we Kurds disregard his maxim at our peril.

The original of this op-ed first appeared on Rudaw.net on January 3, 2016