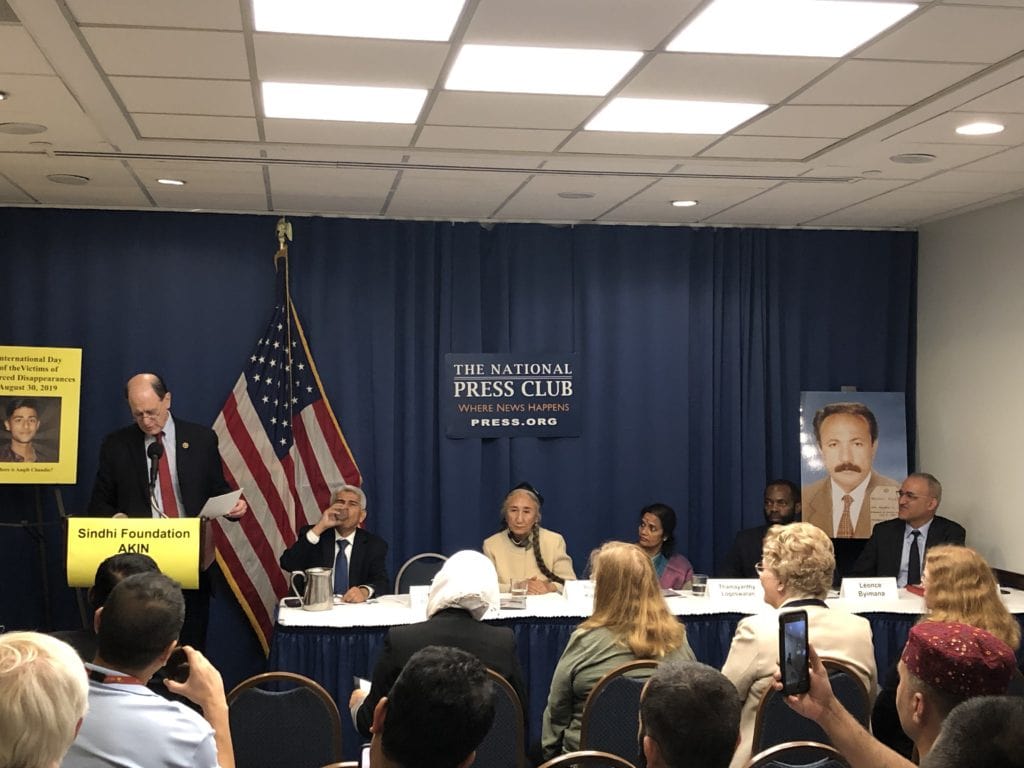 Wedat Aydin didn’t have a say in why he was born a Kurd in an international colony called Kurdistan part of which is now reeling under the jackboots of the Turkish Army.

Nor did he have a say in why he was born in 1954 only to be kidnapped and brutally murdered by monsters masquerading as Turkish police in 1991.

But he had a say in how he lived in 37 years that were allotted to him on this earth. He led an honorable life: as many as 100,000 Kurds attended his funeral rite.

We are gathered here on this special day designated by the United Nations for victims of enforced disappearances to reflect on a life cut short.

He was addicted to freedom.

Unfortunately for humanity, he was born before his times.

Kurdish was his mother tongue. Turkish was his foreign language. He also knew a smattering of English.

He excelled in his studies, attending the School of Education in Amed, the provincial capital of his hometown, Bismil.

Education transformed him into a fearless, self-sacrificing champion for downtrodden Kurds.

But those who ruled the Kurds, then as well as now, primarily Turks, Persians and Arabs, don’t like combinations like educated Kurds, fearless Kurds, resourceful Kurds or God forbid patriotic selfless Kurds.

Wedat Aydin didn’t fit any of these prescribed molds. He became a living, breathing, moving provocative act in the eyes of colonial Turkish administrators.

He needed to be taught a lesson in servility.

His first brush with evil came in 1980 when he was 26. He was arrested, thrown into Amed Military Prison for four years, and horribly tortured—repeatedly ordered to forsake freedom.

But he took their beatings with the patience of Prophet Job, unswerving in his devotion to liberty.

He saw 57 inmates meet untimely deaths. He vowed to remain true to their ideals for as long as he lived.

His second brush with evil came in 1990. He was then 36, attending a conference of human rights activists in Ankara, Turkey.

Thinking that he was among friends, he spoke in Kurdish, a prohibited language, with a friend translating his remarks into Turkish.

Some of his Turkish friends, terrified, ran for cover.

Most of his Kurdish friends stood their ground and gave him a standing ovation.

Police burst in and arrested Wedat Aydin. He spent three months in jail for speaking Kurdish in public.

Jail and torture are favorite tools of colonialists, but Wedat Aydin remained defiant—infuriating his oppressors all the more.

He fought nonviolently and magnificently to expand the boundaries of freedom and liberty in Kurdistan, in Turkey, and the greater Middle East.

He joined the first Kurdish party in Turkey, People’s Labor Party (HEP), and became its president for the city of Amed—the London or Cairo of Kurdistan.

For Turks who spied on his every move, this was the last straw.

They placed him into their crosshairs of death.

Wedat Aydin started that fateful day, like any normal Friday, calling friends to contribute to freedom’s coffers and urging lukewarm acquaintances to close ranks behind HEP.

At 7:30 pm, he came home in a borrowed car, had a light dinner with his wife, Sukran Aydin, went out for some ice cream with their children, and made plans to relax at Lake Hazar next morning.

But morning never came: only a black night of indescribable cruelty.

It began with a knock on the door just before the midnight.

Wedat Aydin answered in his pajamas.

He then told his wife he had to go with police to the station.

She checked the street for police cars, but saw only two unmarked ones.

That, plus heavily armed men at her door scared her.

But she could do nothing—except obey her husband telling her to notify HEP officials and their lawyer.

He added, “Take care of your children.”

He had often used that expression—implying that he had dedicated himself to the emancipation of Kurds… and the raising of their children had become her task by default.

But when she never saw him again, she always remembered these last words of him before his death.

She has taken care of their children all right. They are all adults now. One of them has married and has blessed Sukran with a granddaughter, Solin.

But you couldn’t have known what was in store for Sukran or her three small children on that sleepless night and the excruciating days that followed.

Three days later, his decomposing body was identified in the neighboring town of Maden.

He had been horribly tortured—then shot eight times.

The enraged people of Amed sent a 6,000-car convoy to pick up his mangled body.

He was washed and reverently wrapped with a white shroud in the Kurdish tradition.

He was buried July 10, as 100,000 sorrowing Kurds honored him as their greatest martyr.

But Turkish police, seeking to mock their devotion, found it when our impatient youth threw rocks at Turkish Radio and Television (TRT) office and Mardin Gate Police Station.

17,000 civilian Kurds have been killed since Wedat Aydin’s disappearance—point-blank, or thrown from helicopters to certain death.

792 families still don’t know the whereabouts of their loved ones.

We are in Washington, DC and I feel compelled to address the US attitude on the Kurdish nightmare in Turkey.

In the beginning, Washington bought into the Turkish fiction that only Turks lived in Asia Minor.

As Kurdish struggle came into the open, the US sided with Turkey, because of its membership in NATO.

The support was bipartisan, wholehearted and included America’s deadliest weapons including helicopters.

The relationship is under a lot of strain now because of President Erdogan’s covert alliances with shadowy jihadi groups.

In Syria, Americans have discovered secular Kurds who are a lot closer to Jefferson’s followers than the minions of Erdogan.

An American folk saying goes, “The sun doesn’t shine on the same dog’s back forever.”

Both sayings are harbingers of a better future in the Middle East and we will be there to grab it.

The Kurds of Saladin’s generation subscribed to a religious war and fought the combined forces of Europe in the Middle East.

Our lifetime subscription is to the cause of liberty and we want to secure its blessings for our children in the land of our fathers and mothers.

We will as well.

Thank you for merging the story of Wedat Aydin into your life.

Perhaps you will consider making his fondest dream, expanding the boundaries of freedom and liberty, yours!

If you do, a radiant smile would cross his face—in heaven and we will all remember our Wedat Aydin and say, you did not die in vain.

Kani Xulam delivered this eulogy of Wedat Aydin at National Press Club while observing the UN declared International Day for Victims of Enforced Disappearances in Washington, DC on August 30, 2019.

You could also watch the video of this eulogy on Facebook.