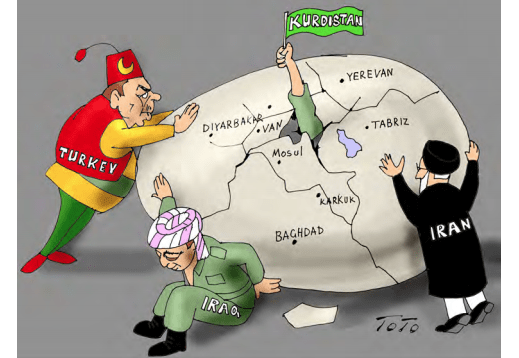 Americans are gearing up to elect their president in November 2020, for a four-year term beginning in January 2021.

The choice will be between the current president, Republican Donald J. Trump, or one of 23 declared Democratic candidates.

Leading the Democratic contenders is Joseph R. Biden who actually knows Kurds and speaks a political language that respects our struggle for freedom in the greater Middle East.

If Kurds are your concerns, they are mine by necessity, he would make a good president and friends of Kurds who are Democrats should consider helping him to become the next president of the United States.

If you want reasons, here are four of mine:

One, he is the only candidate with the Kurdish capital. He knows, for example, not only the name of our last president, but also his children and grandchildren, according to Ben Rhodes’ recent book: The World As It Is.

Two, his definition of foreign policy dovetails with our practice of statecraft abroad: “All foreign policy is an extension of personal relationships.”

Trade may enrich, but these personal touches have their own way of sealing foreign policy deals that may mean freedom or subjugation in the life of vulnerable nations like Kurds.

Three, Biden has not only broken our bread and sipped our tea and tasted our watermelons, but has also shared his bread with us.

He welcomed Masoud Barzani, our first president, to his house on Massachusetts Avenue for breakfast back in 2015.

If he is nominated and elected, our new first family may even get an invitation to his house, this time on Pennsylvania Avenue!

Four, of all the American politicians with a chance to occupy the White House, he is the only one who has published a Kurdish-friendly op-ed in the New York Times—2006.

He compared Iraq to Bosnia and thought a decentralized government in Baghdad would usher in stability and a semblance of peace between not only Kurds and Arabs, but also Sunnis and Shiites.

Two years later, he was in the White House, but as Obama’s vice president. Alas, he wasn’t given the leeway to test his ideas notwithstanding America’s considerable clout in Baghdad.

But knowing Biden and honoring him as a friend of Kurds may have cost us some opportunities as well.

Obama, his boss, had opposed the war in Iraq and thought by removing the American troops from the country, he would make Iraqis privy to his anti-imperialist credentials and give them an opportunity to come together and restore law and order to their republic.

The fact that Iraqis were horrifically abused for decades—and remember Kurds were gassed—and needed a helping hand was, alas, disregarded.

Biden was coaxed to persuade Barzani not to rattle the tottering British construct called the state of Iraq.

The burning issues that needed addressing, such as the status of Kirkuk and the disputed territories, were postponed for the sake of war-weary Obama in the White House.

That is now ancient history between Barzani and Biden. We should, if Americans vote for Biden, still welcome his presidency for the good that it might do for the cause of freedom in the Kurdish Middle East.

His opinion relative to the state of Bosnia has stood the test of time and may be needed again, given the turbulent politics of not just Iraq, but also Syria, Turkey and Iran.

This is of course just one view of what the Biden presidency may mean to the Kurds and Kurdistan inside the Middle East. If you decide to help his campaign, it could also mean a great deal to you as a friend of Kurds inside America.

Imagine witnessing the mechanics of a presidential campaign from the beginning to the end! And if you shine in it, you may also be rewarded with the prospects of a job.

That is what happened to Ben Rhodes. He joined the campaign of candidate Obama at the age of 27 and moved into the White House as a staff when he was 29.

He served President Obama for eight years. That is a 400 percent return on his initial down payment of two years.

“Foreign policy makes no sense,” says Leslie Gelb of Council on Foreign Relations. Alas, he isn’t trying to be facetious. Whatever you think: let honesty and integrity be your principles in dealing with the subject.

This is particularly relevant given the controversies that surround the last presidential election. Heads haven’t exactly rolled, but a few have been thrown behind bars and a presidency may be in jeopardy as well.

If 2020 becomes a duplicate of 2016, let no one accuse you or convict you of any wrongdoing for helping the campaign of Biden or his rivals.

“Honesty,” said Thomas Jefferson, the author of Declaration of Independence, (yes, you are allowed to hate the artist and love his art—given the third president’s views on African Americans and Native Americans), “is the first chapter in the book of wisdom.”

Let that be, not only the first chapter in the book of Kurds, but the last also.

This op-ed first appeared on the website of kurdistan24.net