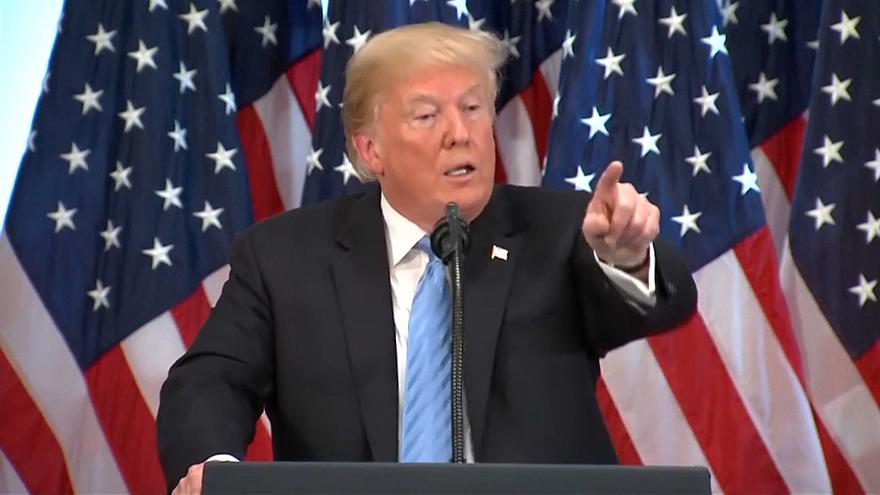 It was an extraordinary occasion when President Trump recognized not one but two Kurdish journalists at his recent press conference in Manhattan, New York.

It exhilarated the Kurds, but I suspect blindsided the Foreign Policy Establishment or in his words the “Deep State” that are deeply entrenched with the preservation of status quo in the Middle East.

Can Kurds expect some good news from this clash of titans the way Poles freed themselves from the clash of Germans and Russians after the First World War?

Majeed Gly, the first Kurdish journalist to enjoy the presidential spotlight, was understandably nervous when Mr. Trump recognized him in a room crammed with big-name reporters.

Mr. Gly began his question by saying he was a representative of Rudaw Media Network.

But the words, Rudaw Media Network, didn’t ring a bell for Mr. Trump. Curious about Mr. Gly’s background, he asked, “Who are you? Where are you from?”

Mr. Gly said he was from the Kurdistan Region in northern Iraq and added: “I am a Kurd.”

He began to sing our praises.

Rahim Rashidi, a reporter for Kurdistan TV, was there and couldn’t believe his eyes or ears.

He must have leapt to the edge of his seat, and the president must have noticed it, for he took a break from his superlatives and asked Mr. Rahimi, if he was a Kurd.

Mr. Rahimi, without a mike, told the president he was.

Mr. Gly then noted that Kurds are under a lot of pressure in Syria and Iraq and given their critical support for America’s war on Islamic State, will Mr. Trump now help them in their hour of need?

There was more, but the above exchange, alone, would have been enough for the Kurdish media to headline President Trump as a potential friend of the Kurds.

And we would have considered ourselves lucky if the other journalists had made a passing reference to the superlatives of Mr. Trump on behalf of our people.

But President Trump was not done with the Kurds. After taking another question from another reporter, he recognized Mr. Rashidi and said, “Yes, please, Mr. Kurd?”

Mr. Rashidi took his new moniker with flair, reminded the president that he was an American Kurd, and asked a variation of Mr. Gly’s question, adding, Iran is posing a real threat to Iraq, Syria and especially Iraqi-Kurdistan and if that was okay with President Trump.

Mr. Trump served a second helping of his initial fare and praised us even more—noting that Americans and Kurds had fought together against the Islamic State and that Kurds had shed their blood to defend their territory.

He didn’t dwell on the word territory. He would have shaken the decrepit Middle East and the Foreign Policy Establishment to their foundations if he had said: Kurds had shed their blood to defend their territory, K.U.R.D.I.S.T.A.N.

But he did say, “We lost tens of thousands of Kurds—fighting ISIS. They died for us, and with us, and for themselves. And we don’t forget.”

A perfect follow up question would have been, “Mr. President, how many of your Turkish and Arab allies have died while fighting ISIS?”

Alas, no follow-ups were allowed.

Mr. Trump didn’t mention it, but we also lost 7,000 of our daughters as sex slaves. One of them, Nadia Murad—a survivor, just shared the Nobel Peace Prize for 2018 with Dr. Denis Mukwege.

Four years earlier, ISIS had declared Yezidi Kurds infidels and helped themselves to their daughters. Some of the outraged Kurds had joined the ranks of Peshmerga, others of People’s Protection Units, to blunt their expansion.

But all this camaraderie meant nothing when an Arab army equipped with American weapons and guided by Iranian intelligence agents took Kirkuk, the majority Kurdish city, in October 2017.

The same happened in Syria three months later when the Turkish army attacked Afrin, another Kurdish city, this time with a hoodwinking from Russia. Again, it was quiet in the city on the Potomac.

But not in Manhattan.

After Mr. Trump called Mr. Rashidi, Mr. Kurd, some of the assembled journalists took umbrage at President Trump for referring to one of their colleagues, as Mr. Kurd, with tweets that went viral.

Mr. Rashidi wasn’t one of them. He tweeted, “I’m #MrKurd & very proud. #TrumpPressConference. Thanks Mr. @POTUS for recognizing Kurdistan’s contribution in the fight against ISIS #rahimrashidi”

“Good for you. But if you think Trump understands anything about the history of the Kurdish struggle for independence or actually cares beyond how Kurds can be used by Americans as ‘good fighters’ , I have a bridge to sell you.”

I was tempted to forward her message to President Trump with these words, “Our adversaries take us for fools for helping you conquer two Arab cities while we lost two of ours. Not good. Mr. America, please don’t compound our woes.”

I didn’t do it. Edward Gibbon stopped me: “Persuasion is the resource of the feeble; and the feeble can seldom persuade.”