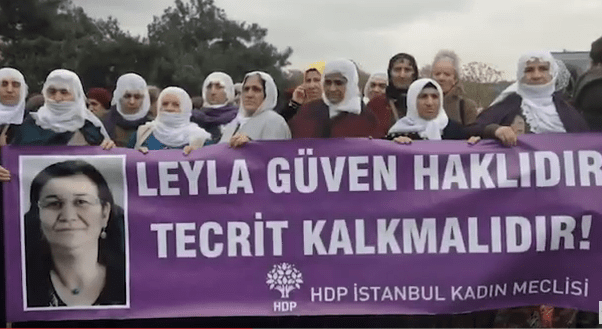 Somewhere in the bowels of a miserable Turkish prison, a duly elected Kurdish member of the Turkish parliament lies dying.

She has been on a hunger strike for more than two months now in Amed, Kurdistan, Turkey.

Leyla Guven may be the next Kurdish martyr joining the ranks of Kemal Pir, Mehmet Hayri Durmuş, Akif Yılmaz and Ali Çiçek who undertook their own death fasts in the same city on Bastille Day in 1982.

Arrested after criticizing Turkey’s military onslaughts against Kurdish militia in Afrin, she began her somber fasting on November 7, 2018, while addressing a Turkish judge from a jail cell via video link.

She declared she was “starting an indefinite hunger strike” to protest the isolation of Abdullah Öcalan, a founding member of the Kurdistan Workers’ Party (PKK).

Mr. Öcalan is arbitrarily denied access to his lawyers and loved ones, even though Turkish law guarantees that right to all its prisoners.

No one has heard from him since September 11, 2016. Before that, he was visited regularly by Turkish officials and Kurdish politicians, even hailed as a potential Nelson Mandela of Kurds.

Those days are gone, melted into a hot war between Turks and Kurds.

But it may be easier to climb Mount Everest than to find a potential President FW de Klerk, the man who freed Mandela, in the person of Turkish President RT Erdogan.

Here are some of the main obstacles confronting the Kurds of northern Kurdistan:

While Leyla Guven is slowly losing her eyesight and hearing (due to hunger strike) to give peace a chance, the stomach-churning Turkish prosecutor is accusing her of fomenting “terrorism” in Turkey.

If you think that is Orwellian at its best and it is, there is more to Guven v. Turkey case.

The country’s most recent parliamentary elections were held on June 24, 2018. Two jailbirds, Leyla Guven and Enis Berberoglu, put their names on the ballots.

Both got elected. Turkish law stipulates that elected officials enjoy immunity from prosecution while serving the public good.

Mr. Berberoglu, a Turk, was released.

The Kurdish parliamentarian is barely surviving on a daily diet of three tablespoons of sugar, two teaspoons of salt, water and one 500 mg vitamin B1.

She may soon be nothing but a pile of dead bones and dry skin.

The Turkish media treat her as an alien from outer space. The Kurds have written about her case, sparking scores of solidarity fasts in Kurdistan, Turkey, Europe and even Canada.

If you are a Kurd reading this, you can’t help but scratch your head about the timing of this fast considering the rhetoric of war that is radiating from Ankara.

When a reporter asked Leyla Guven via her lawyer about her expectations, she related to him the story of the Tunisian vendor who sparked a revolution in the Arab world and said, “The same possibility exists in our country.”

One Turkish colleague of Leyla Guven in the Turkish parliament has criticized her fast. We may not like what he says, but it behooves us to at least listen.

Yavuz Agiralioglu is peeved by constant appeals by elected Kurds in the Turkish parliament that something should be done to save the life of their colleague.

He spouted many irrelevancies, but one thing he said deserves our attention: “So long as you do not distance yourself from terror, you can not expect us to relate to your demands for the rights [of Kurds].”

For Mr. Agiralioglu, it is a crime to take up arms against the Turkish state. He forgets, of course, the original crime of the Turkish government to ban the language of Kurds and prohibit us from calling our homeland, Kurdistan.

Are we supposed to just swallow this harsh cruelty?

Nevertheless Mr. Agiralioglu’s one sentence is not without its merit.

Mahatma Gandhi, the liberator of India, effectively used hunger strikes along with other acts of civil disobedience to emancipate his people.

He categorically rejected the use of violence and nonviolence together.

Kurdish parliamentarians will find it hard to appeal to the better angels of their Turkish colleagues while Kurdish guerrillas target Turkish soldiers on the mountains of Kurdistan.

It may be worth comparing Gandhi’s struggle with ours.

It took Gandhi and his army of nonviolent activists 33 years to free India from the clutches of Great Britain. Mr. Öcalan’s fight against the Turkish state will enter its 35th year next August—and Kurds still are not free.

Alas, the liberation of Kurdistan is no longer a goal. But peace, the slogan of Leyla Guven’s party, Peoples Democracy Party (HDP)—“In Spite of Everything Peace,” is also in jeopardy.

Here is a harsher reality: President Erdogan, like the Vietcong in Vietnam, has smelled blood in the constant Kurdish desire for peace and like them wants unconditional surrender.

How should the peace lovers of northern Kurdistan deal with the warmongers of Ankara?

“The first human who hurled an insult, instead of a stone, at his foe was the founder of civilization.”

Let the Kurds be the insulting party.

Let us be the civilizing side in the Turkish-Kurdish conflict.

If we do, we might even save the life of Leyla Guven.

Isn’t it worth a try?