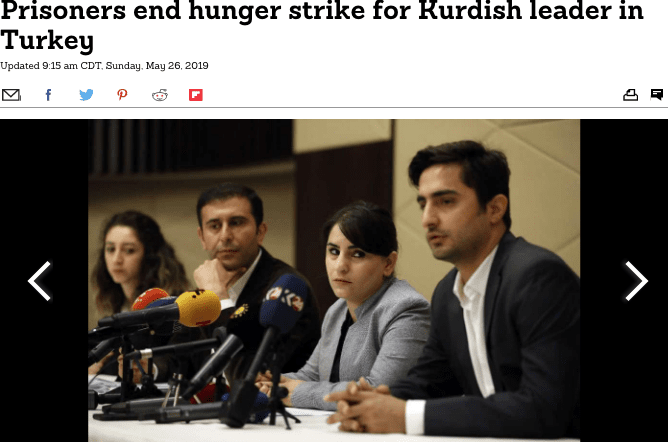 Turks everywhere solemnly honor November 10, 1938 and its anniversaries, as a day of mourning. That’s when the founder of their country—Ataturk, so-called father of the Turks—died of liver failure due to alcoholism.

In Turkey, Turks stop work to observe his passing. Kurds are also expected to take part in these involuntary rituals. Our children do since their teachers leave them with no choice but to mourn and praise the “deathless” Turk.

Kurdish adults are another story.

They practice a peculiar form of hypocrisy.

On the inside, they know that Ataturk was their tormentor. His adopted Armenian daughter bombed us to please her father. The expression, “like father, like daughter” captures their spite for Kurds.

On the outside though, the Kurds do their best to be polite to their impolite Turkish neighbors by pretending they are sorry for the loss of Ataturk.

But why do Turks force Kurds to go through these phony ceremonies? Why can’t they lead honest lives and let us do the same for ourselves?

Will this corrosive and unhealthy relationship ever end?

They didn’t kill any Ataturk-mourning Turks, but made some Kurds wonder: can these new toys be the game-changing tools we have been waiting for?

Turkish imperialism employed Western technology to drive the Greeks from Istanbul. Can Kurdish freedom do the same to expand the boundaries of freedom and liberty in the Middle East?

I’ll definitely drink to that—even uncork a bottle of Dom Perignon that I have been saving for the emancipation of the Kurds and liberation of Kurdistan.

But before you think about what you should do with your own bottle of champagne, let’s pause a bit and examine a current hunger strike, the largest in the history of Kurdistan.

It was initiated by Leyla Guven, co-chair of Democratic Society Congress, and the duly elected representative of Culamerg/Hakkari.

Three days before the Kurdish attack on the Turkish targets in Sirnak, she told a sitting Turkish judge in Amed/Diyarbakir that she was starting a hunger strike to end to the in-prison isolation of Abdullah Ocalan.

You may ask: why did the fighters of PKK attack Sirnak, on Ataturk’s death date no less, when they knew that Leyla Guven had initiated an indefinite hunger strike in Amed/Diyarbakir?

While you mull over your answer, 2,982 other Kurdish prisoners from 92 Turkish jails have joined Guven with their own fasts. Dozens of others have done the same in southern Kurdistan, Europe and Canada.

These brave daughters and sons of Kurdistan are all political prisoners. Four, including Leyla Guven, are members of the Turkish parliament representing thousands of constituents.

Seven of these hunger strikers in Turkish jails and one in Germany have already ended their lives instead of waiting for hunger to do its job.

Thirty of them have vowed never to eat till their demand is met.

Will the Turks let 3,000 Kurds die of hunger in the coming months? Will no one else stand up for their basic demand, the impartial application of law in Turkey, a country that enjoys robust relations with the world?

Inside Turkey itself, two people can put an end to their suffering, but both are playing it coy for now.

The Turk who can halt this grim harvest of mounting dead bodies is Recep Erdogan, the president of Turkey.

The Kurd is Abdullah Ocalan, founding member of Kurdistan Workers’ Party and a prophet-like figure for the striking prisoners.

Until now, Erdogan has used his authority as chief law enforcement officer to toy with Ocalan, like a cat plays with a mouse. Power, like a good bottle of wine, has made him drunk enabling him to engage in unlawful abuse of the Kurdish leader that has almost become habitual and unbearable.

Erdogan can open all doors to Ocalan, if he wants, such as he did in 2013, when he let him speak, via emissaries, to over 1,000,000 assembled Kurds in Amed/Diyarbakir.

But if Erdogan is miffed—as he sometimes is for years—he arrogantly slams Ocalan’s prison door shut.

Nearly six months after the hunger strike of Leyla Guven and her friends, Erdogan allowed two lawyers to visit Ocalan on May 2 for about 50 minutes. Four days later, they read a statement of him in front of the cameras.

Kurdish mothers who were anxiously waiting for the word “stop” found out that the restrictions on Ocalan’s isolation had not been lifted. Future visits would still depend on Erdogan’s whims. Ocalan, on his part, expressed concern about the fate of Syrian Kurds and urged their leadership to respect, “Turkey’s sensibilities.”

What are the “sensibilities” of Turks who speak for Turkey when it comes to the Kurds? In plain English, they want Kurds to be leaderless and docile. Will Ocalan, for example, commit suicide to fulfill the “leaderless” requirement of Erdogan? Kurds, including the striking ones, yearn to be free, not docile!

Ocalan then greeted the “resistance” of friends in and out of prisons. He wished them well, period. You may think it heartless, but he had his reasons for not ending the hunger strikes—at least not yet.

Back in 2012, 700 Kurds, some members of Turkish parliament, began a death fast to restore Ocalan’s visitation rights. Erdogan allowed Ocalan’s brother to visit him in Imrali Island and with one word, the fast ended on the 68thday—on November 18, 2012.

But as it turned out, Erdogan didn’t restore Ocalan’s full visitation rights. He went back to his old habit of playing absolute king in the flawed democracy of the Turks. The Kurdish losses now are for the subjugation of Erdogan to the supremacy of Turkish laws. Is it right for Kurds to sacrifice for someone else’s majoritarian democracy?

Ataturk loved sacrificing Kurds whether they liked it or not.

Will Erdogan be any different?

We will have to wait and see what the coming months bring.