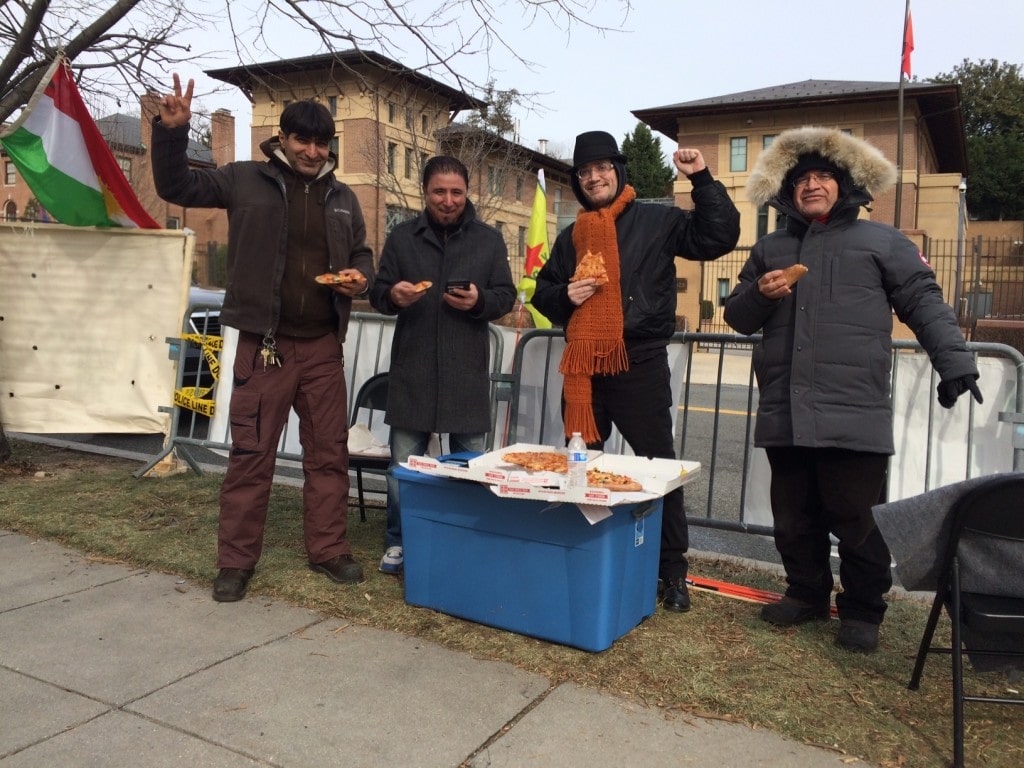 today’s posting comes from pat davis. no relations to paul davis, the author of “turkey needs a dr. king” op-ed about our vigil in yesterday’s rudaw english.

pat is a poet, playwright, writer and a wonderful human being who toils tirelessly for the good of wronged and abused folks from central america to kurdistan.

i invited her to our press conference. i then asked her to pen her impressions of it for our daily posting. it follows my editorial commentary.

something else happened on day 6. a group of young turkish looking males entered the turkish embassy grounds without paying attentions to our banners.

as they exited the building, they hurled profanities at us and shook their fists.

three reactions: i wish we had filmed them. the spectacle would have provided you with some entertainment.

freud says: “the first human who hurled an insult, instead of a stone, at his foe was the founder of civilization.”

i am not ready to associate any civilizational value to the rantings of these angry turks, but i wish they had come to us and talked to us. who knows, we might have even persuaded one or two to join us!

speaking of visitors to the turkish embassy, those who do not look like turks take a long look at our signs and invariably reach out to their iphones.

ps. we reached out to professor noam chomsky, recep tayyip erdogan’s newest bugbear for a message of solidarity for our vigil. he responded affirmatively. it will posted later today for day 7.

“On Friday, January 15, my nine-year-old daughter, Anna, and I visited the vigil site across from the Turkish embassy to support the call for an end to Turkey’s atrocious attacks on Kurdish civilians. We wanted to demonstrate our solidarity with the Kurdish people as they demanded respect for their human and cultural rights.

My daughter was off school that day, and the vigil was a good teaching opportunity. Looking across the street at the counter-demonstrators gathered in front of the Turkish embassy, I pointed out to her their enormous flag, their slickly manufactured signs. Clearly, I said, the Turkish government has put money into their gathering. On our side of the street, the signs were homemade and heartfelt. I pointed out the Kurdish flag that hung beside the banners. We stood in the cold sunshine and listened to the statements vigil organizers read before the TV cameras.

Anna, I’m sure, was shocked to learn of the brutality of the Turkish government, which has fired on civilians, even children, killing them in their homes.

After the press conference was over, we left the vigil site. I took Anna ice skating at the Sculpture Garden. When we returned home later that afternoon, her dad asked how we had spent the day. Anna said, I’ll draw what we did.

She drew herself skating, of course. She drew herself climbing a tree. But before any of that, she drew a Turkish flag, which she erased to make room for her next drawing, just as large, if not larger: a finely rendered, precisely detailed Kurdish flag.”