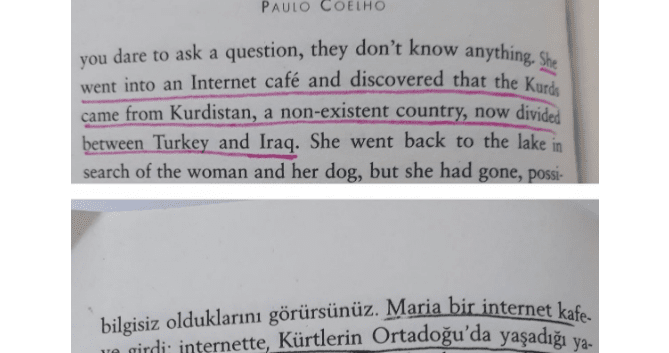 You are hot news in Kurdistan—among its lovers of literature to be exact.

But we can’t yet award you any literary prize for honoring our homeland and its hapless children in your novel, Eleven Minutes.

We also owe you a debt of gratitude for exposing Brazil as a supplier of Turkey with tear gas canisters that have brutalized our children who were part of Gezi Park protests.

You entered our conversation via our Turkish neighbors who apparently love your books as we do, but can’t fathom the fixation of Maria, Eleven Minutes’ protagonist, with such words as Kurds and Kurdistan.

They have arbitrarily corrected you and her—making Maria speak as Turks do—so when she discovers that the Kurds are from Kurdistan, they have her say, in Turkish, that we are from the “Middle East.”

Yes, Turks are a peculiar people, Mr. Coelho—believing they can bury entire countries like Kurdistan, the way we entomb dead people.

They have, alas, never heard of the time-tested observation of Dr. Martin Luther King Jr: “Truth crushed to earth will rise again.”

Two Kurds, Murad Dildar and Jehat Kilic, discovered the oddity between the English and Turkish translations of your novel.

They alerted the Kurds who had read your book of Maria’s long-buried little-known secret that the Kurds were not from the “Middle East,” but a country of their own: Kurdistan.

Thus, for fifteen years—since the publication of your novel in Turkey, millions of your readers were not exposed to the observation of Maria about the reality of Kurdistan in your work.

The translator of your novel, Saadet Ozen, says she can’t recall the passage about the homeland of Kurds and thinks it was censored after her submission to the printing house.

The printing house owner, Can Oz, doesn’t know why Kurdistan was deleted either, but has offered to recall the unsold books from the bookstores and publish a new version with the censored word intact, all nine letters … the way you had it in your book.

You and readers of this open letter may think this is good news, that Turks are no longer afraid of the word—Kurdistan, but the reports out of Trabzon, a Turkish province, say the opposite.

Last week, a group of Kurdish tourists were on the shores of its Uzungol—meaning long-lake in Turkish, peacefully enjoying the views and taking pictures.

But one of them made the unforgivable mistake of apparently posing with a Kurdish scarf—with Kurdish colors and the explosive word “Kurdistan.”

That infuriated a brutish Turkish mob, which violently beat the innocent Kurds forcing them to flee for their lives.

Fortunately, Turkish police were nearby and saved them from lynching, but they were still arrested and deported to neighboring Iraq. The same police, if you ever wondered why Kurds proudly wear the title rebel next to their names, let the assailants go free!

While the word Kurdistan is waiting for its debut in the Turkish version of your novel, numerous Kurds have sent you tweets urging you to weigh in on the obscene Turkish omission with a tweet or statement of your own.

Alas, you have not taken a position so far.

I am writing this open letter to you in hopes of remedying the situation. Please Mr. Coelho, go to your Twitter feed and say something worthy of your friend Shimon Peres, the late president of Israel.

He was, as you know, a good friend of our people and you are affiliated with his Peres Center for Peace. Mr. Peres urged President Obama to support Kurdish statehood the way President Truman had given a helping hand to the state of Israel at its birth.

Unfortunately, the American president—whose own children are the descendants of slaves—couldn’t be bothered with the emancipation of Kurds and liberation of our homeland.

But you, Mr. Coelho, with your gift of crafting the best-selling novels in the world—selling 350 million books thus far—may want to consider embracing our quest for freedom in your next work of fiction.

Imagine penning an epic novel that turns the Middle East into a field of light where freedom is welcomed and heads are cultivated—instead of being severed from their torsos, as befitting a region that gifted the Western world, long ago, its writing, prophets and judges.

You would be honoring your readers, including Kurds, your friend Shimon Peres, your protagonist Maria and the beautiful baritone singer of human rights, Dr. King.

Please, Mr. Coelho, help the crushed truth about the Kurds and Kurdistan rise to its feet in spite of those who would like to bury it six feet under.

It will add luster to your name and halt the rivers of blood that Kurdish patriots have shed to reclaim their ancient homeland for their children.

I remain truly yours,