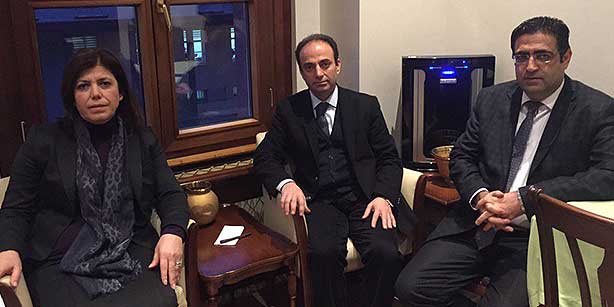 I was deeply moved by your tearful humanitarian plea to your colleagues in the Turkish Parliament for ambulances to remove 28 maimed and bleeding Kurdish civilians—victims of Turkey’s lawless war—to hospitals in the town of Cizre in Turkish Kurdistan.

I am even more stirred that you have now camped at the Ministry of Interior’s headquarters for an open-ended hunger strike with your Kurdish colleagues, Meral Danis Bestas and Idris Baluken—hoping for a miracle!

I wish you well.

Please permit me to also express some relevant concerns.

They spring from a soulmate who waged a 32-day hunger strike on the steps of the United States Capitol and is coordinating the current vigil for peace in front of Turkish Embassy in Washington.

You are trodding the lofty, and often lonely, path travelled by nonviolent giants such as Mahatma Gandhi, Martin Luther King Jr. and Cesar Chavez.

You are gallantly subjecting your body to the sufferings of privation and agony, seeking to evoke the compassion of your interlocutors.

First and foremost, please assess the forces that are arrayed against you, balanced against the strengths that you marshal to tackle the enduring thorny question—the peace with justice that eludes both Kurds and Turks alike.

Militarily speaking, the Turks are too strong for their own good and the Kurds are too weak to secure the blessings of peace for themselves and their offspring.

Morally speaking, the Turkish misrule over the Kurds is so egregious that if the world knew of its true dimensions, Turkey would be subjected to the same harsh sanctions imposed upon South Africa when Apartheid ruled supreme.

Your hunger strike nobly transmits an appeal to the moral person who lives in an immoral society.

If voiced right and kept pure, your actions can move mountains.

If you want to be the liberator who lifts that boulder of oppression from the backs of the Kurds, I hope you will proclaim your concerns plainly and unequivocally:

Declare your firm opposition to the violence of the Turkish state, as well as the Kurdish youth, now fiercely battling Turks across the barricades.

Tell Turkish authorities that if they stop their offensive war against the Kurds, you will move to Amed (Diyarbakir) to continue your hunger strike there, urging the Kurdish youth to halt their violence against Turkish soldiers and police.

We must somehow end this violent war, which Kurds clearly lack the military power to win without subjecting Turkish Kurdistan to a Vietnam like destruction by the United States.

Turks have a built in advantage in violence: their guns are bigger than those of the Kurds, and they will not easily forgo what NATO has given them over the years for the sake of fairness.

To even the odds, you need outside help.

You must somehow kindle in the lovers of freedom the urgency of joining the struggle of Kurds for basic human rights and common decency.

You must somehow arouse in humanity the necessity to recognize—and to excise—the ugly cancer of “Turkish style” authoritarianism.

You must somehow persuade a critical mass to join you in shouldering the wheel of justice, in order to harvest the fruits of liberty.

Send Meral Danis Bestas to the United States Congress to do her hunger strike here. There is a lot of goodwill towards the Kurds of Syria and Iraq for fighting ISIS these days. The American lawmakers can be your potential allies.

Dispatch Idris Baluken to camp at the United Nations office in New York. That world body has sadly lost its voice relative to the Kurds. But his gaunt, withering body, when persuasively focused in their sights, may remove the scales of apathy from their eyes.

Remember that when a storm batters the trees, the leaves on the extremities go down first—which in the Turkish war on Kurds means that the weakest and the poorest suffer most.

As their representative, your inspirational decision to partake in their suffering is reminiscent of what Gandhi, King and Chavez did to ennoble their causes.

They helped to elevate their societies above the evil of violence, so that, as prophet Amos, a favorite of Dr. King, put it, “Let justice roll down like water and righteousness like a mighty stream.”

I started with your actual tears, and will close with literary ones.

“We need never be ashamed of our tears,” wrote Charles Dickens in Great Expectations, “for they are rain upon the blinding dust of earth, overlying our hard hearts.”

Yes, God has given hard hearts to the Turks.

It is up to us to soften them.

Your words may have lost their swaying power.

But your body, through your illustrious hunger strike, can help awaken a slumbering world to the undeniable imperative of peace between the Kurds and the Turks.